Give Australian Rules footballers Gary Ablett Jr and Brad Sewell a Sherrin and they’ll be well in their comfort zone. 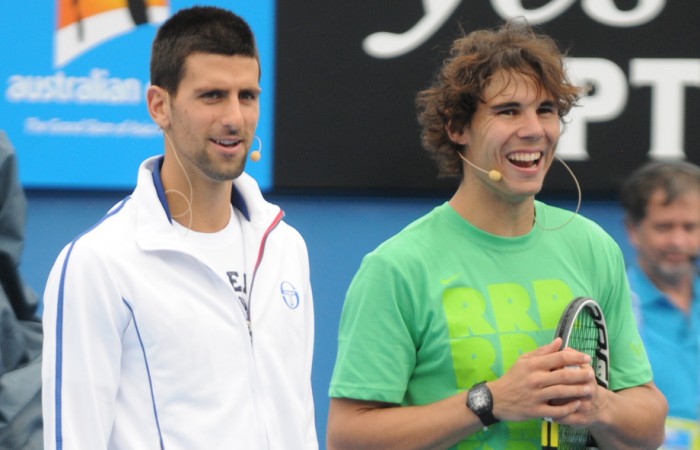 Give Australian Rules footballers Gary Ablett Jr and Brad Sewell a Sherrin and they’ll be well in their comfort zone.

But give them a tennis racquet and put them in the middle of a tennis court? Well, it may not be their comfort zone but they still looked right at home.

The two AFL premiership-winning stars were only a handful of well-known Australian identities and current tennis champions who took part in today’s MLC Kids Tennis Day.

Thousands of youngsters brimming with excitement queued up early this morning to take part in a unique experience, to meet their favourite players and have a hit on the famous Melbourne Park courts.

The day delivered a lively environment focusing purely on the kids, and promoted MLC Tennis Hot Shots, a national program aimed at developing kids and getting them involved in tennis.

“MLC has a long-standing commitment to supporting Australian communities and our partnership with Tennis Australia brings this to life in a very tangible way.

“In addition to supporting the youngest stars of the game through initiatives such as Kids Tennis Day, this partnership provides us with an exciting opportunity to align ourselves with one of Australia’s most iconic brands; The Australian Open,” said Mr Tucker.

Garden Square was decked out with a range of vibrant activities and stands, but the event that drew the most attention was the exhibition.

Thousands of onlookers were treated to a “super-dooper tiebreaker” played out by Australian celebrities including Ablett and Sewell, actors Blair McDonough and Klara Lisy, Powderfinger’s Darren Middleton and surfer Sally Fitzgibbons.

The inconsistent quality of tennis was rectified by the enthusiasm on court, as the celebrities were equipped with microphones to interact with the crowd and occasionally attempt to explain their sometimes-wayward groundstrokes.

While the kids didn’t mind the odd missed forehand or backhand slice that didn’t even make the net, special guests and celebrity captains Henri Leconte and Mansour Bahrami weren’t so forgiving.

“Are you on our side or theirs?” a playful Leconte asked Fitzgibbons after an unforced error.

But the atmosphere skyrocketed when Grand Slam tournament champions Sam Stosur, Novak Djokovic and Kim Clijsters took the court, and a raucous roar erupted when a late Rafael Nadal stepped onto the Plexicushion.

“Obviously, the kids were having a really good time. That’s what it was all about today. It was nice to be a part of it,” said Stosur.

Ablett, despite admitting to being struck by nerves before his hit, said the day was a great way to promote the sport among kids and lauded the tennis champions who showcased their skills.

“It was a fantastic day, the crowd’s having fun and it’s just great for tennis,” Ablett said.

“I think it’s great that [the top tennis players] can take the time out and do what they did today, and they all seem like great people.”

Middleton also mentioned how important the day was for kids.

“I was looking around and they’re just having a great time, banging walls and yelling for their favourite players,” he said.

“I saw my tennis hero Rafael Nadal today, everything he did was funny on court,” said eight-year-old Tai Marshall.

“I caught his ball [he hit into the crowd] … I am going to keep it forever, and sleep next to it tonight!”

Garden Square was buzzing as youngsters and their families scurried around to other activities such as face painting, testing their serve speed and having their photo taken with the Australian Open trophies.

Outside courts overflowed with budding young players as they participated in agility drills, hit on the mini courts and received words of positive encouragement from the coaches.

Hundreds also queued at MLC Autograph Island where fans – not all of them kids – were able to meet some of their favourite players, including world No.1 Caroline Wozniacki, Radek Stepanek, Sabine Lisicki and Australians Peter Luczak, Monique Adamczak and Bojana Bobusic.

Not only were the kids excited, but the players were also appreciative of the support they received, as was the case for Czech tennis player and world No.31 Stepanek.

“It’s always great for us to see kids coming over, seeing their idols and having a chance to hit a few balls here,” Stepanek said.

“Seeing their excitement is a sign that you did something right in your career, and it’s a reward for your hard work.”

Stepanek stressed the importance of getting kids interested in the sport early and said the day was a perfect way to do just that.

“I think the times when people are starting to play tennis at 11 or 12 [are gone] because if you really want to get to the top I believe you have to start early as a kid,” he said.

“I think this today [is] a great chance to see the best players in one place and see if [the kids] have the desire for the game, and they can go from there.”

Perhaps the biggest kids of all were Leconte and Bahrami, who entertained the fans with their playful and energetic behaviour.

Entry to the event required a gold coin donation, with all money going towards the Australian Tennis Foundation.