Hewitt bows out in Sydney

Battling Lleyton Hewitt has bowed out of the Sydney International after a three-set defeat to fifth seed Viktor Troicki. 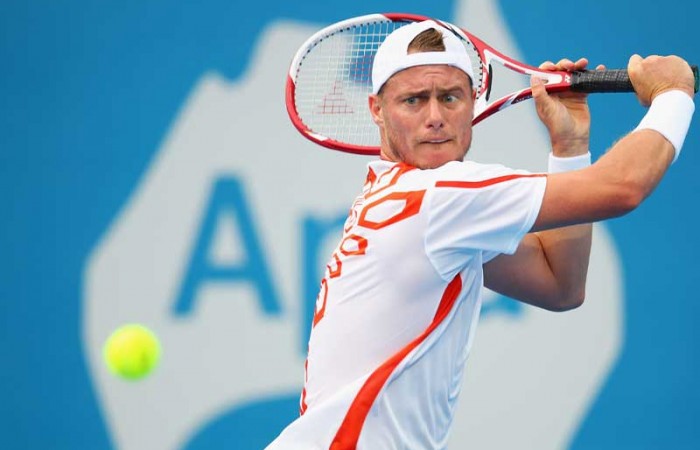 The fire and fight remain but the finish just wasn’t there for Lleyton Hewitt, who may have bid farewell to his Sydney fans after a three-set first-round loss at Olympic Park on Tuesday.

Four-time champion Hewitt bowed out of the Sydney International 6-4 3-6 2-6 to world No.21 Viktor Troicki in a typically stoic performance.

Trailing 4-1 in the first set the former world No.1 wound back the clock with some vintage passes, reeling off five straight games to take the set.

Up a break in the second, the signs looked good for Hewitt to record his best win on tour since beating Gael Monfils at Wimbledon in 2010 but a faltering serve saw the match slip away for the former world No.1.

Hewitt will now head to Melbourne for his 16th consecutive Australian Open campaign.

But ranked No.182 in the world and at almost 31 years of age the sun is setting on the two-time grand slam winner’s career, a recent toe injury far from helping his cause.

He said the toe was in much the same condition as when he played his first competitive match of the year against Spain’s Fernando Verdasco at the Hopman Cup in Perth.

“That’s probably the biggest positive out of it.

“If I played (after the) first match against Verdasco and couldn’t walk the next day that was going to be a worry, but it hasn’t got any worse.”

With one win from his four matches of the year but some positive signs most times he played Hewitt admitted being frustrated.

“But as I said, I didn’t come to Perth or here with the highest expectations,” he said.

“It was to try and get match hardened as much as possible.

“Sure, I would’ve liked another match or two here for sure. But all said and done, I felt like any movements got better throughout the Hopman Cup. Then I think tonight was the best I moved – better than I moved in the Hopman Cup, which is a positive, because obviously my movement is such a big part of my game.”

As for his future Hewitt was typically non-committal about his longer term plans only offering that he’d still like to play in Sydney again next year.

“At the moment I would like to,” Hewitt said of playing the grand slam lead-in tournament again.

“Obviously my focus is on the Aussie Open next week.

“To tell you the truth, we got that and then two weeks later, a week and a half later the Davis Cup in Geelong. I haven’t looked past that.”

On an otherwise quiet day on the men’s side of the draw crowd favourite Marcos Baghdatis was a 6-4 6-4 winner over Dmitry Tursunov while Radek Stepanek, Julien Benneteau, Fabio Fognini and Alex Bogomolov all moved through to the last 16.