Stosur upstaged in Sydney first round 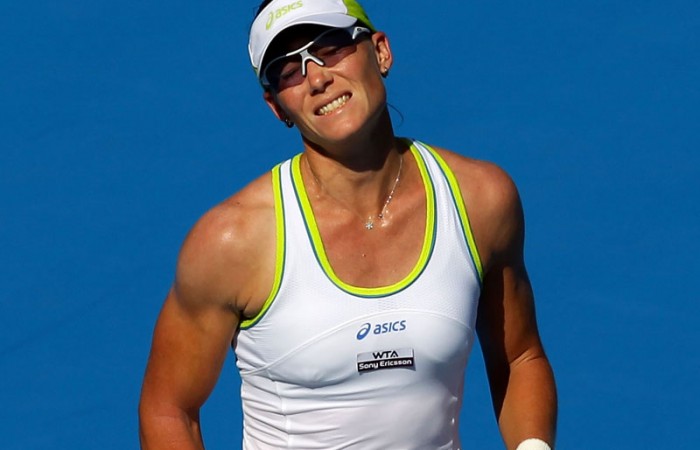 Samantha Stosur’s Australian Open preparations copped another hammer blow on Monday with a first-round exit from the Sydney International.

While she trails 6-4 in their career series, Schiavone has a nagging habit of raising her game for the big stage against Stosur.

The world No.11 famously beat Stosur for the first time in five meetings in the 2010 French Open final and then upstaged the Australian in a crucial Fed Cup rubber last February in Hobart.

And despite looking leaner and meaner than ever, Stosur again had no answers to the Italian’s craft and grit on Monday.

The match was all over in 88 minutes, with Schiavone advancing to a second-round meeting with Daniela Hantuchova, who downed Roberta Vinci 7-5 6-2.

Li needed barely an hour to sweep past Ekaterina Makarova 6-0 6-3 after winning the first nine games of the match.

The French Open champion next faces a qualifier, either South African Chanelle Scheepers or Hungarian Melinda Czink, for a berth in the quarterfinals.

Li kick-started her memorable 2011 season in Sydney last year, backing her up final triumph over Kim Clijsters with a charge to the Australian Open decider – which she ultimately lost to Clijsters – and then reigned supreme at Roland Garros.

But even after an undefeated campaign at last week’s Hopman Cup in Perth, China’s first and only grand slam singles champion isn’t looking back.

“I don’t have to think about what I did already last year. I mean, everyone has to look forward to see what you should do right now.”

The Belarusian faces a tougher second-round clash with either former world No.1 Jelena Jankovic or German Julia Goerges.