Kanepi arrives on the big stage

Kaia Kanepi has emerged as an Australian Open 2012 danger card following her final victory in Brisbane. 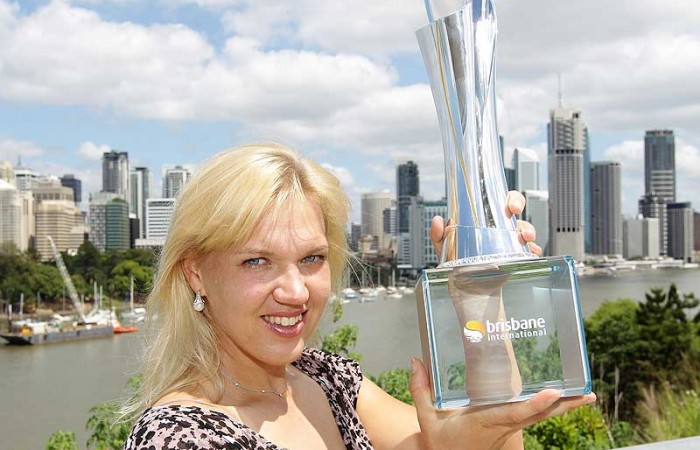 Never heard of Kaia Kanepi? That is about to change if history repeats in 2012.

Certainly, the Estonian was hoping the Brisbane International had discovered tennis’ next big thing for the second straight year after snatching the tournament’s women’s singles crown on Saturday night.

World No.34 Kanepi capped a giant-killing run with a 6-2 6-1 thrashing of former top five player Daniela Hantuchova in the final to clinch her second career title.

Coincidentally, a year ago, then little-known Czech Petra Kvitova – also ranked No.34 – raised the Brisbane trophy aloft before winning Wimbledon and finishing 2011 as the world’s number two player.

Asked if she believed she could follow in Kvitova’s footsteps, Kanepi said: “If I am playing like this, I think I can.”

The Brisbane International boasted its strongest women’s field in 2012, yet the final featured two unseeded players for the second straight year.

The 26-year-old downed three seeds at the tournament, including world No.10 Andrea Petkovic and former French Open champion Francesca Schiavone.

But Kanepi was not taking anything for granted after the laidback blonde endured a horror 2011 plagued by Achilles problems.

And living in a fishbowl existence as the Estonian tennis poster girl – she was the first from her country to win a WTA title and reach a grand slam quarterfinal – has also kept her honest.

“History shows nothing comes easy for me,” Kanepi said.

“And also in previous years, I have had pressure to play well to reach high in the rankings.

“Estonia have seen I can play very well – hopefully, they are satisfied.”

But Kanepi – expected to move to world No.26 after her win – could see a silver lining on the injury cloud that hovered over her last year.

Indeed, she almost credited her frustrating sidelines stint with compiling a 13-3 run leading into the Australian Open.

“Maybe that little break gave me extra power to play well now,” said Kanepi, who did not allow a break point in her last two matches in Brisbane.

“When she puts it all together, she is a very dangerous player,” said Hantuchova who will rise three places to world No.21 after reaching the final.

“She has a big game and one of the best serves on the tour at the moment.”