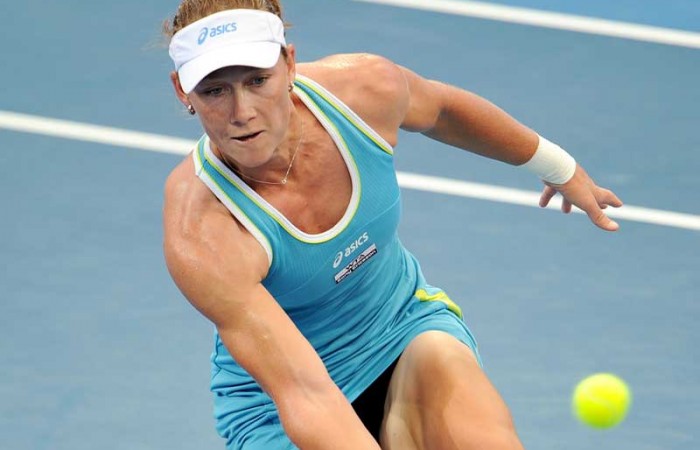 With nine of the world’s top 10 players competing, and the lowest-ranked direct entrant ranked 25th, the Australian Open lead-up event was always going to throw up some mouth-watering first-round encounters.

Stosur, though, wouldn’t have budgeted for an opener against her Italian nemesis Francesca Schiavone, the world No.11 who only missed a seeding by two rankings spots.

Stosur leads Schiavone 6-3 head-to-head, but lost their most important meeting at Roland Garros two years ago.

If she negotiates a path past Schiavone, Australia’s US Open champion will face either fellow Italian Roberta Vinci or Slovak Daniela Hantuchova for a quarter-final berth.

Second-seeded Wimbledon champion Petra Kvitova, who has a first-round bye and will displace Caroline Wozniacki as world No.1 if she wins the tournament, also lurks in Stosur’s bottom half of the draw.

Stosur crashed out in the second round at this week’s Brisbane International and is eager for match practice ahead of the season’s first grand slam starting on Monday week.

But as she prepared to tread a minefield in her new home city of Sydney, the 27-year-old Queenslander admitted any victories this week would be a bonus.

“I can’t say winning the event’s ideal or making the quarters is ideal. Who knows what the best scenario is going to be,” Stosur said.

“The only thing you can worry about is how you’re playing and if you’re doing the right things.

“If that means you end up winning five matches, fantastic. You can be as confident as what you could be going to Melbourne.

“But if it doesn’t happen like that, preparing and doing what you can do is all you can do.”

The fifth-ranked Li was the special guest at Saturday’s draw and expressed a public “thank you” when an official thrust her against a qualifier.

“This tournament is always tough, even in the qualities,” Li said.

“It’s stronger than any other tournament so I saw the draw and I play a qualifier and that’s not easy either.

“I know I won last year, but this year is another story.”

But last year’s Australian Open runner-up regained her confidence with an unbeaten campaign at this week’s Hopman Cup in Perth.

“I’m happy with what I’m doing on the court now.”

Hewitt faces Serbian fifth seed Viktor Troicki in the opening round and landed in the top half of the draw featuring the likes of No.1 seed Juan Martin del Potro, former champions Marcos Baghdatis and Dmitry Tursunov and fellow Australian wildcard Matt Ebden.