Roger Federer and Rafael Nadal ease into quarterfinals at Doha. 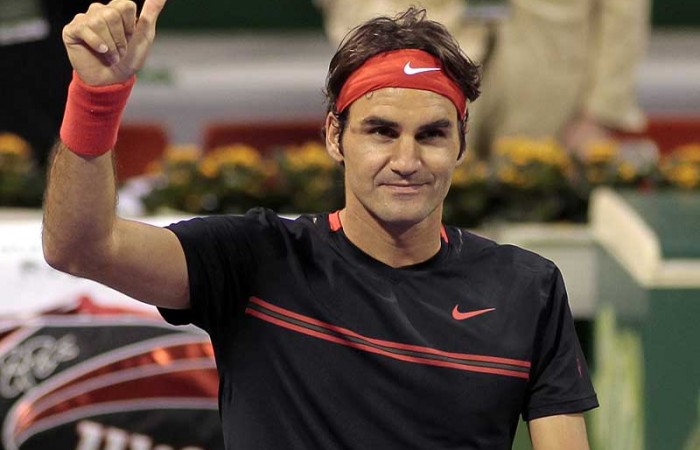 Roger Federer and Rafael Nadal kept on course for a meeting in the opening ATP final of the season as both eased into the quarter-finals of the Qatar Open in Doha on Wednesday.

Federer, the grand slam record-holder from Switzerland, delivered a smooth and graceful performance for the second successive day in beating Grega Zemlja, a qualifier from Slovenia, 6-2 6-3 in only an hour.

In a contest of well-contested rallies though he needed half an hour longer than Federer.

Nevertheless Nadal did seem to be achieving some of his new year objectives – in particular playing more aggressively, and getting used to a heavier headed racquet.

“I am also trying to return (serve) a little bit better,” he said.

“The worst things I did last year was with my return. I was happy with the way my return worked today (Wednesday).

“A few things worked well. With the weight of the racquet I started to have a good feeling, which is very important.

“I also want to have enough shots not to be predictable. I want to attack the ball faster and hit with more power and spin.”

That sounds like particularly bad news for Nadal’s rivals, many of whom consider he hits with more than enough power and spin already.

He was soon 3-1 up, and after saving two break back points in the seventh game, began to accelerate again, ripping trademark forehand drives from near the backhand tramlines and winning the last 14 points in a row.

His ability to produce such an elegant performance in the variable breeze was something of a mystery. He was asked how he managed it.

“Not getting frustrated,” he replied.

“I used to be very emotional when I was younger, after growing up in Switzerland where we didn’t have wind that much, and where we also played indoors (a lot).

“It was difficult learning how to play in the wind. But I have had a lot of practice playing in windy places, and it doesn’t bother me any more.”

Federer next plays Mikhail Youzhny, who is one of his former practice partners.

Nadal next plays Andreas Seppi, the eighth-seeded Italian, who overcame another Spaniard, Guillermo Garcia-Lopez, 7-5 6-3, and may have the ability to make Nadal raise his standard again.

He is also likely to see Nadal arriving with different luggage. The holder of ten Grand Slam titles forgot to bring his normal kitbag, and arrived with an odd little case, pulled along on wheels.

Quizzed about it, Nadal admitted he considered using his troublesome shoulder as an explanation for his unorthodox style of baggage.

“But actually it’s the bag I have for my computer, and play station, and all the cables – so I pulled out everything and put the clothes in there! Er, did you like it by the way?”