Rafael Nadal had to fight hard not to lose his opening match of 2012 in the Qatar Open. 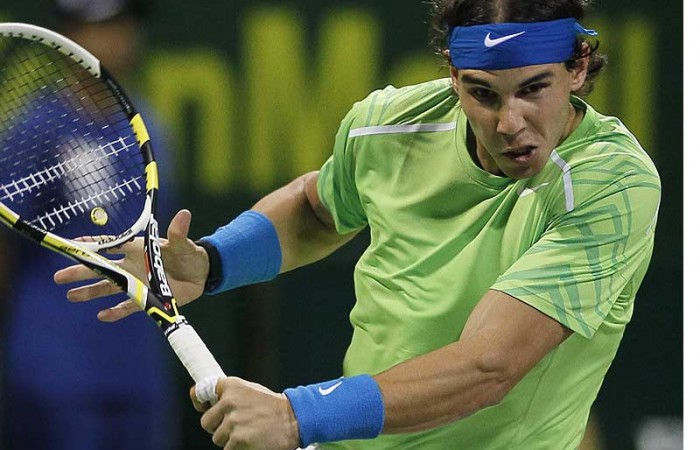 Rafael Nadal had to fight hard not to lose his opening match of 2012 in the Qatar Open, going a break of serve down in the final set before surviving against an opponent ranked outside the top 40.

The French Open champion from Spain fought back with typical courage in his 6-3 6-7 (2-7) 6-3 win over Germany’s Philipp Kohlschreiber but it was a patchy performance which left an impression that tennis is a bit of a struggle for him at the moment.

Nadal found it hard to achieve rhythm and consistency with his ground strokes, sometimes leaving the ball short, and allowing his intensity to subside surprisingly during a second set spell when he went 1-4 down.

But after dropping serve in the first game of the final set, the world No.2 began to hit some more solid blows, particularly with inside out forehands taken from the backhand corner, and finished looking much more in charge.

“I didn’t have a chance to practise much. I had problems with my shoulder and knee, and arrived feeling so-so,” Nadal said, referring to an off-season curtailed by the late finish of the 2011 Davis Cup.

“So a victory was very important. The beginning was a bit risky but I came back well and played a bit more aggressive.”

This was not  the Nadal depicted in his New Year resolution, one who aims to become more permanently an aggressive player, taking the ball on or inside the baseline at every opportunity.

He had his excuses. It was a cold, windy evening, and he was using a new heavier headed racquet with which he has previously competed only once, in an exhibition event.

“When I say I want to be more aggressive, it doesn’t mean that I want to try that every day,” Nadal explained when interviewed on court.

“It doesn’t mean it will happen in the first match.

“I need time. But I have decided to play aggressive. This is something which is needed.”

Nadal was probably referring both to his long-term physical survival on an increasingly arduous tour, and the extra dimension needed to answer the surge of Novak Djokovic, who took over as world No.1 last year.

Nadal, who next plays another German, the qualifier Denis Gremelmayr, believes his shortcomings were just some of the normal difficulties in re-acquainting himself with a tennis match.

He later came up with a more positive interpretation.

“I was happy with my level,” he said.

“I am happy having matches on the court. I didn’t know if I would be here a week and a half ago.”

The second-seeded defending champion from Switzerland needed less than an hour to get past the former champion, Nikolay Davydenko, 6-2 6-2.

Federer admitted he surprised himself with the level of his performance against the Russian opponent who beat both himself and Nadal while winning the 2010 Qatar title.

“I played aggressively, served well, and I had good movement, which is surprising early on in the season,” said Federer.

“But there again every match is new, and I will have to work on my game because every match in the draw is potentially tough.”

He next plays Grega Zemlja, a qualifier from Slovenia who won 4-6 6-1 6-1 against Sergei Bubka, a wild card entrant who is the son of the famous Soviet pole vaulter.