It was a great day for Australian hopes at the 2011 Brisbane International on Monday. 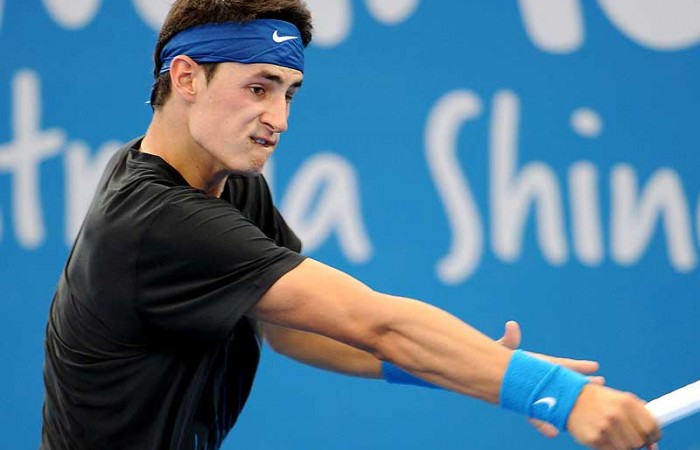 It was a great day for Australian hopes at the 2011 Brisbane International today, with the nation’s top two players progressing through their first round matches.

It was a dream start to the 2012 season for Stosur, arriving on Australian shores with huge expectations on her shoulders after hoisting her first Grand Slam singles trophy in New York in September.

“It was fantastic to come out here and start my year off like this here in Brisbane where I love to play and in front of you guys was a really good atmosphere out here and I loved every second of it,” she said.

“I was really looking forward to getting this year started and I finished the (last) year quite well and wanted to keep going … it was a good start tonight and hopefully I can keep it going.”

The women’s top seed broke serve to love in the second game and raced out to a 3-0 lead. Monstering her forehand and showing a willingness to move forward and pick off volley winners, Stosur breezed through the opening set in just 28 minutes.

It was more of the same in the second set. Stosur displayed her full repertoire of shots in the second game, producing a delightful drop shot followed by a backhand volley winner on her way to another service break and a 2-0 lead.

The Belarussian seemed to become more comfortable with Stosur’s prodigious topspin as the second set progressed, holding serve to claw her way back to 2-4 and gaining several chances to get the set back on serve in the following game.

But Stosur’s greater firepower and confidence proved insurmountable – the Aussie came through that epic seventh game to move ahead 5-2, and two games later wrapped up the match with a forcing approach shot that Yakimova could not handle.

Tomic toughs it out

World No.42 Tomic scored his first ever win at the Brisbane International in four visits, holding off the more experienced Julian Benneteau to record a 6-2, 4-6, 7-5 victory.

“It’s all experience and now that I’m a bit more experienced I know what to do in situations like this in three setters,” Tomic observed.

He moved ahead 5-0 and despite surrendering two straight games due to sloppy errors, cleaned up his game enough to take the opening set.

Benneteau channelled his frustration positively in the second set, forcing Tomic further back in the court and scoring a service break in the seventh game on his way to levelling the match at a set apiece. And when he smacked an off forehand winner to gain a break to lead 3-2 in the third, it appeared his greater experience would pay dividends.

The Australian broke back immediately with a forehand winner and eventually reached two match points in the 10th game as Benneteau became increasingly hobbled by cramp in his left calf. But he was hurt by several nervous errors and a failure to capitalise on the Frenchman’s frequent double faults, and soon Benneteau levelled at 5-5.

“It’s always good to think positive but sometimes you can’t … You always get doubts in your head, especially at big points,” Tomic said after the match.

“But if you think positive and do the right things you usually win the big points.”

Tomic fought hard to remain upbeat as another three match points went begging in the 12th game, but thanks to the Frenchman’s 12th double fault after two hours and 26 minutes, Tomic booked a second round date with either fellow Aussie Ben Mitchell or Japanese qualifier Ito Tatsuma.