They may have battled it out on the court today but Tennis Australia CEO Steve Wood and MLC boss Steve Turner ultimately confirmed a partnership. 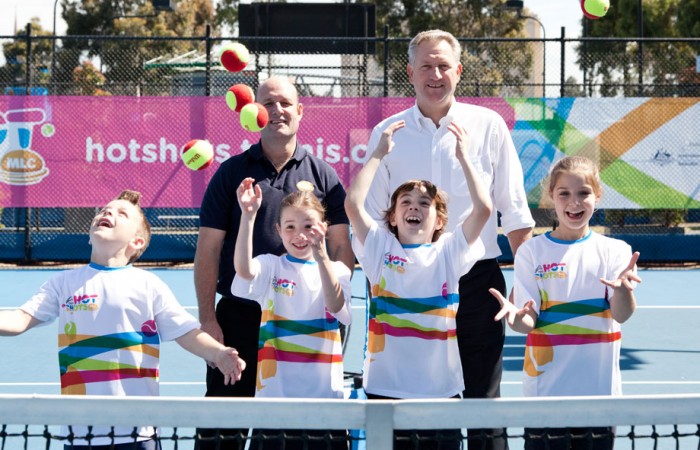 They may have battled it out on the court today but Tennis Australia CEO Steve Wood and MLC boss Steve Turner ultimately confirmed a partnership.

MLC announced they have extended their sponsorship with Tennis Australia for a further three years.

The deal will see them continue to assist in the development of young Australian tennis players through the MLC Tennis Hot Shots program.

MLC are also set to play a role during Australian Open 2012 with the launch of MLC Kids Tennis Day to be held on Saturday January 14.

Wood said he was thrilled the partnership between Tennis Australia and MLC would continue.

“We’re very pleased to have MLC on board.  They are an iconic Australian brand and to be contributing to the Hot Shots program in the way that they are has been fantastic for us,” he said.

“This is our number one grassroots program and we are really committed to driving participation across Australia with the MLC Hot Shots program.”

He said the program, which is designed for children aged 10-and-under, has proven successful to date and is still growing.

Tucker said MLC is excited to be an influential part of tennis in Australia.

“Tennis is a great sport because it involves all of the family and it’s attractive to young kids, older people and all the different types of clients that we like to do business with as well,” he said.

“It’s a perfect fit for our brand and it’s a really exciting sport and a game that everyone can play and we really enjoy being part of it.”

He said the Australian Open will be a great chance for kids to get to understand the game.

“We’re looking forward to the MLC Kids’ Day, which will be exciting. We’ll have thousands of kids running around here learning about tennis.”

Woods and Tucker were today challenged on the court by four youngsters from the successful program.

Australian tennis star Alicia Molik is the ambassador for the program.