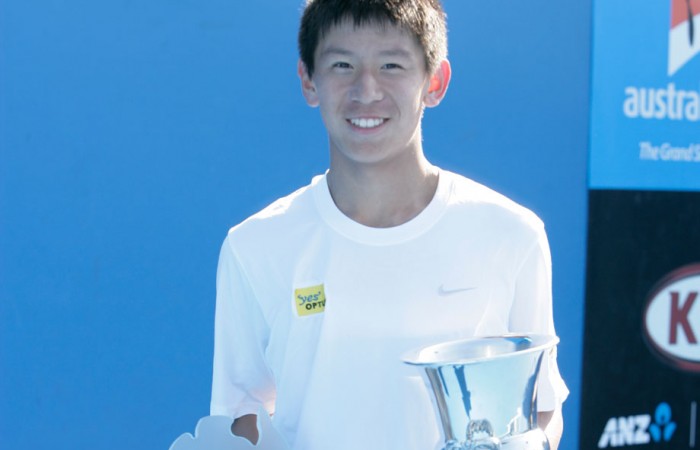 Tanza was forced to fight for his title in a seesawing affair that saw the final scoreline read 6-4 1-6 6-1.

Tanza said it was great to finally get a win over his good friend.

“I train with Jay I haven’t beaten him in training and I haven’t really played him in a tournament before so it’s always good to have a first win,” he said.

He said training with Jay meant he was at both an advantage and a disadvantage coming into the match.

“I thought it gave an advantage and a disadvantage. I know how hard he plays, how hard he can hit and what he can do but at the same time he knows the same things [about me].”

While the girls’ final was bathed in sunshine, the boys were forced to contend with overcast and blustery conditions early.

The usually animated Andrijic started the match in a calm frame of mind coasting to a 3-0 lead.

The number two seed controlled the opening period with an array of powerful forehands. Despite his agility and speed around the court, Tanza was no match for the barrage of bullets heading his direction.

But this honeymoon was short lived as Tanza regrouped to get himself back into the match and even the ledger 3-3.

Andrijic began to lose his composure after hitting a series of wayward ground strokes as a result of lacklustre footwork.

Tanza took out the vital break at 4-3 before going on to take out the first set 6-4.

In was a different story in the second set as Andrijic regrouped following his earlier disappointment. The 16-year-old wasted no time in recording a 6-1 win to force the match into a decider.

But it was Tanza who was able to seize the opportunity and consequently the match. The vital break was registered in the fourth game when he took a commanding 3-1 win.

Tanza did not look back, racing to take the final set 6-1, leaving Andrijic to yell out in frustration and despair.

Tanza said he had a dream run through the tournament.

“I feel great I honestly wasn’t expecting to win either today or yesterday. I thought I had a good week and played solidly.“