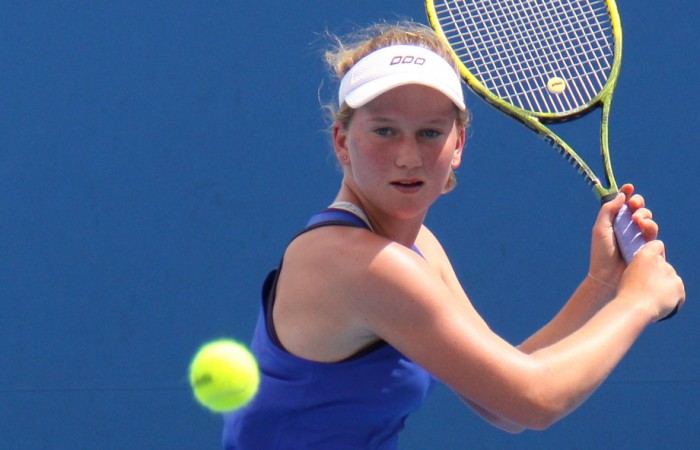 No seeded player will contest the Optus 16s Girls final after second seed Astra Sharma was knocked out of the semifinals by Brigitte Beck and Eliza Long defeated Sara Tomic.

The Victorian said confidence was the key to victory over her more-fancied opponent.

“I thought I played a really good match. I came out here really confident, which I thought was important because I’m the type of player that thrives on confidence and momentum,” she said.

“I think the fact that I stayed aggressive helped. In the second set she was dominating the play and that’s why she got the set 6-3. In the third set we were both controlling the points but I was able to stay aggressive.”

The first set proved a close encounter with the match tied at 5-5 on serve. Beck was able to hold with comfort before breaking the number 2 seed to take the set 7-5.

Sharma regained her composure in the second set, overpowering Beck and moving one break up after the first game.

Finding herself 0-2 down, Beck managed to break the Sharma serve in the fourth game and hold her own serve to move the score to 3-2.

This revival was short lived as Sharma broke again and began gaining momentum and confidence. The 16-year-old dominated play, forcing her opponent into making simple errors.

The West Australian had a chance to take the second set on serve but was broken by Beck forcing Sharma to break in the following game to take the set 6-3.

Beck called for the trainer before the beginning of the final set to receive treatment for a lower back complaint.  The injury seemed to be troubling the Victorian as Sharma raced to an early 3-0 lead.

But Beck launched a spirited fightback, breaking Sharma in the fifth game and getting the score back on serve.

With scores locked at 4-4 the pressure became too much for Sharma who double faulted twice to hand Beck a vital 5-4 lead.

The final game was filled with drama as it took Beck six match point before she was able to close out the decider 6-4.

Beck said she would seek the assistance of a physiotherapist to ensure she is ready for tomorrow’s final.

“It’s been a bit sore throughout the week and I was just feeling it on my serve so I’ll go to the physio and get that checked out during the week and hopefully it will be good to go tomorrow.”

In the other semifinal today young gun Sara Tomic was defeated in two sets by the unseeded Eliza Long 7-6 6-4.

Tomic had Long on the ropes late in the first set when she had the opportunity to take a one set lead on serve while with scores at 5-4.

But Long was able to fight her way back into the set, forcing the Queenslander to play off in a tiebreak that she claimed 7-3.

The second set started as a tight affair with both players breaking each other in the first two games.

Despite Tomic placing heavy pressure on the Long backhand it was the Victorian who was able to gain the commanding break in the seventh game taking the score to 4-3.

Long closed out the final set 6-4 on her serve.  The result sets up an all-Victorian final tomorrow. It will be the first time Beck and Long face off against each other.

Long said she was thrilled to be into the final.

“It’s a bit overwhelming before these nationals I had never made the quarterfinals so to get to the finals is just an achievement in itself,” she said.

“I felt like I just had to keep calm because she was really attacking and hitting it deep.”

Long said she would struggle to sleep tonight in anticipation of tomorrow’s match.

“I’ll do a bit of a cool down now and just try and get some sleep and not get too nervous about it.”

Boys battle it out at Melbourne Park

The 15- year-old had never previously beaten Tu and said it was good to get one over the number one seed.

“I thought I played great in the first set after I got off to a great lead. Then I just hung in there in the third,” he said.

“It gives me great confidence because not only is he the first seed but I played him a couple of months ago and I didn’t beat him so it’s great to get my first win.”

Tanza surprised Tu by gaining a break in the first game of the match.

With scores locked at 4-1 the number one seed managed to break Tanza back and score what was a much needed game.

But Tanza was able to steady the ship, holding comfortably in the seventh game and taking a commanding 5-2 lead.

An emotional Tanza cried out in joy a as he claimed the first set 6-4.

But it was always going to be difficult to keep Tu down in the second set.

A classy forehand winner down the line gave the number one seed a 40-15 advantage in the second game and allowed him to race to a 2-0 lead.

Tanza failed to capitalise on a break point opportunity in the fifth game and Tu cruised to a 4-1 lead.

He managed to save four break points with the scores at 5-2 but Tu was easily able to close the set out on serve.

An enthusiastic Tanza returned to the court ready to again mount a challenge against Tu.

The New South Welshman showed off his ability to cover the court as he consistently scrambled to return Tu’s ground- strokes. Eventually the tactic won out as Tanza was able to break the South Australian and gain a 2-1 lead.

Tanza capitalised when presented with two match points on the Tu serve with scores at 5-3.

Tanza said he was excited to be playing in tomorrow’s final.

“Of course, it’s always a great honour to be in the national final,” he said.

Meanwhile second seed Jay Andrijic was given a scare by George Wall in their semifinal clash.

After comfortably taking the first set 6-2 Andrijic began to lose his cool in the second.

Wall mounted a spirited charge on the number 2 seed as Andrijic made a series of unforced errors.

The New South Welshman’s frustration began to boil over as the set ventured into a tiebreak.

Wall lifted his intensity while the animated Andrijic struggled to come to terms with a run of unnecessary errors and some bad luck.

The third set was filled with just as much excitement and passion as the prelude.

Andrijic took on the persona of another Australian tennis star with his hat placed backwards on his head and his passionate cries of ‘come on’.

Eventually the second seed obtained the crucial break in the fifth game after a double fault from Wall. He then went on the serve out the final set 6-4.

Andrijic said overall he was please with today’s performance.

“I was quite happy with the win. I haven’t been playing great this week but I’m just happy to get through it and win ugly,” he said.

He said that he was looking forward to playing his training partner Matt Tanza in the final.

“I train with Matt back in Sydney. He’s a good mate of mine so it should be a good match tomorrow.”