Battle of the Codes finds its champion

While the top Australian tennis players battled for a prized wildcard into Australian Open 2012 as part of the December Showdown, sports stars from a variety of other codes were showing off their tennis talents on the Plexicushion at Melbourne Park in the inaugural Battle of the Codes competition. 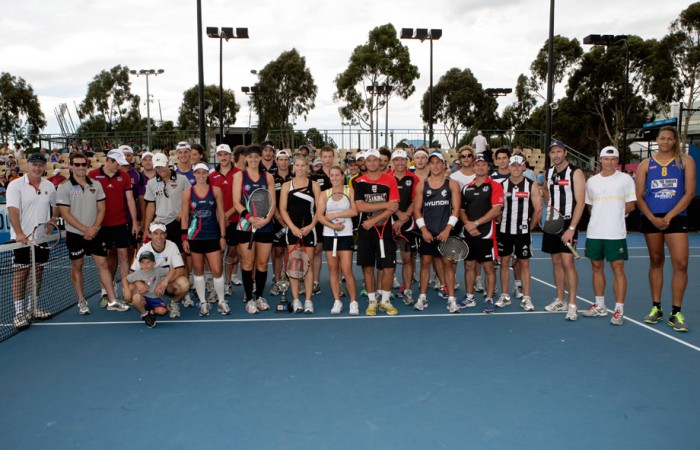 While the top Australian tennis players battled for a prized wildcard into Australian Open 2012 as part of the December Showdown, sports stars from a variety of other codes were showing off their tennis talents on the Plexicushion at Melbourne Park in the inaugural Battle of the Codes competition.

It was the who’s who of Australian sporting talent – players representing clubs from Australian Rules football, rugby league, rugby union, netball, women’s basketball, cricket and surfing were all on show before sizeable crowds.

While not every player was as talented on the tennis court as they are in their chosen sport, many showed a surprising talent for tennis. Most notably George Bailey from the Melbourne Stars 20/20 cricket team, which went on to win the trophy against the management agency Essentially Group, represented by Brendan Fevola and Australian tennis stars Isabella Holland and Sally Peers.

We roved the outer courts to get a load of the action in the round-robin stage of the event – the winner being whoever was ahead after 15 minutes of play – and witnessed all the thrills, spills, mind games, racquet throwing, errant shots and blinding winners that shaped the 2011 Battle of the Codes.

1:18 pm – it was the boys versus the girls on Court 5 as AFL’s Melbourne Demons took on netball’s Melbourne Vixens. For the Vixens – represented by Bianca Chatfield and Madison Browne – it was a one-sided affair. And they were on the wrong side of it. The Demons, particularly Cale Morton, proved fairly handy tennis players, and won 5-1. Coming off the court, the girls held their heads up high and were resolute going into their next match.

“Just to aim for the body,” Chatfield said of their upcoming tactics. “And forehead,” Browne added, “and tubing as hard as you can, because we reckon that they might get a little bit nervous if we try to hit them.”

Downplaying the honour of representing the Vixens – Browne said it simply came down to who best donned the Vixens outfit – Chatfield said it was a very different story for some of the other teams. “The Melbourne Stars, they’ve actually recruited some serious tennis players. I think that’s against the rules,” she said.

1:32 pm – Following the Demons and Vixens onto Court 5 was the Essentially Group, with Fevola and Holland tackling Ryan Hinchcliffe and David Kidwell of the Melbourne Storm. Fev was thrilled with his partner, describing Holland as a “gun” to a former Carlton teammate over the fence, but actually played quite well himself, opening the match with an ace that was unfortunately called a let. “A bit stiff,” he muttered to the chair umpire.

After Holland nearly killed one of the Storm boys with a vicious return, Peers replaced her on court. Fev was in fine comedic form, blasting Peers for letting the team down on serve. But it mattered little – Essentially Group wrapped up a comfortable win.

Fevola had apparently been preparing for the event against fellow Aussie Rules player Steven Baker, but said both he and Baker were hopeless. “I was lucky enough to get the girls … Because I’m no good. They’re building my confidence up,” he said.

As for his team’s toughest test, Fev said he was keeping his eye on the Western Bulldogs.

“Will Minson is apparently carrying on a bit over there, rates himself a little bit. He’s probably going to be our biggest challenge.”

1:47 pm – We love a bit of carry-on, so we headed to the Bulldogs’ match on Court 4 against Carlton to catch a glimpse. There was Minson, engaging in some trash talking with Bryce Gibbs at the net before some cat-and-mouse tennis in the forecourt. Gibbs responded by targeting the big ruckman with his big forehand, but was running a solo effort out there – Gibbs’ partner Dave Ellard proved ineffectual when armed with a giant human-sized racquet.

Minson could definitely hit the ball well, so after the Bulldogs’ win we asked him about his tennis-playing history. It turns out he would be well-suited to a career as a groundsman at Wimbledon.

“We had a beautiful grass tennis court, which I remember building as a child with my father … we graded it, and I remember standing on the back of a tractor as a six or seven-year-old trying to apply a bit of weight to the grader that we were pulling over the tennis court. And I remember weeding it, lining it and mowing it – to my father’s credit it was a beautiful tennis court,” he revealed.

2:00 pm – It was a far less beautiful display when we headed across to Court 6 to watch Essendon take on the Stars. It was football versus cricket, and the footballers were struggling to hold up their end of the bargain.

With the Bombers down 0-4 and Henry Slattery smashing the ball everywhere but inside the court – including into a cameraman – Aussie tennis figurehead John Fitzgerald came on to help out the Bombers. It didn’t count for much though, as the Stars soon went up 5-0

Watching from the stands was Australian basketball star and one of 2011’s top WNBA draft-picks, Liz Cambage. She said she and her Bulleen Boomers partner Rachel Jarry felt the Bombers’ pain. “We’ve won just one game in two matches. We’re getting absolutely smacked on the bottom,” she said.

“I feel bad because Rachel’s actually pretty good. Meanwhile, I can’t even get my hand-eye coordination with the racquet happening. It’s just too much and it’s really embarrassing.

“Mum tried to get me into tennis when I was four years old, and I didn’t want a bar of any sport back then … I feel sorry for her right now. She’s given birth to a tennis failure.”

Finals – With the round-robin results completed, it was the Stars, Hawthorn Hawks, Surfing Victoria and Essentially Group that each finished atop their pool. The Stars took on Hawthorn in the semifinals on Court 6, and lost their first game of the entire competition after leading 5-0 when David Hale and Josh Gibson were replaced by coach Alastair Clarkson and his pre-school aged son. Yet the dynamic father-son duo ran out of time to erase the deficit.

Joining the Stars in the final were Essentially Group, and the three-pronged attack of Fevola, Peers and Holland proved too much for Surfing Victoria’s Nic Muscroft and Jack Perry over on Court 5.

And so to the final. Before a big crowd on Court 6, Melbourne Stars and Essentially Group battled out an entertaining match that featured some excellent rallies, but the cricketers began to get on top when Bailey floated a wickedly sliced shot into the open court, sending Fevola madly scrambling and squealing and drawing a big laugh.

As time was called, the Stars lead 3-2, and as a result captured the first ever Battle of the Codes title. Chatting with Fitzgerald after the match, the Stars’ David Hussey revealed that Bailey had indeed played a lot of tennis and was a talented sportsman across a number of codes.

The day was capped with a tiebreak, featuring the winners up against the talented combination of Fitzgerald and Peter Luczak. And unfortunately for the Stars, they were brought back to earth.