Twenty-four-year-old Stephanie Bengson has definitely taken the road less travelled in getting to the Australian Open 2012 Wildcard Play-off at Melbourne Park this week. 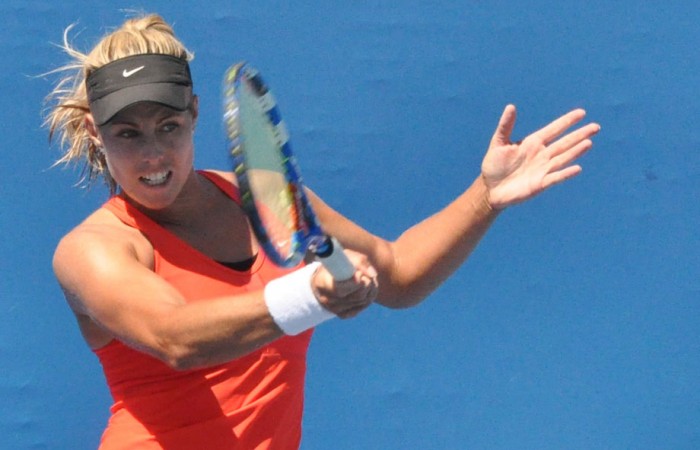 Twenty-four-year-old Stephanie Bengson has definitely taken the road less travelled in getting to the Australian Open 2012 Wildcard Play-off at Melbourne Park this week. The blonde-haired, blue-eyed girl from Albion Park, just south of Wollongong, still marvels at the fact she is competing here.

“This is my first time to Melbourne Park,” she beams. “It has been the best experience for me.”

Not only has she been gaining invaluable experience in playing against the likes of Casey Dellacqua and Ash Barty, she is using the opportunity to grow her tennis network, tell people about her journey and learn from others about how they have gone about it.

“I’m running into so many people for the first time,” Bengson said. “I’ve constantly got my phone out getting numbers.”

She describes her fellow players this week as “fantastic, really easy to talk to … it could have been intimidating, but all the girls are really friendly.”

Bengson headed to Melbourne without a lot of expectation, just wanting to take as much from the experience as she possibly could.

“Obviously, I wanted to play well but it’s just been amazing … to play Ash, to play Casey … I’m only going to get better from that kind of tennis.”

On the court this week, Bengson wasn’t able to come up with a victory during the round-robin stage, despite pushing Emelyn Starr all the way in a dour 6-7 7-5 5-7 struggle.

“You always go in optimistic,” she says about her matches this week, “and I feel like if I play well, I can match it with anyone.”

“I certainly don’t want to sell myself short before I even walk on the court.”

This kind of statement rings especially true for Bengson.  Easy going and full of personality, she is clearly a determined young lady, firmly focused on establishing herself on tour.

Bengson looked relaxed in the Players Cafe after going down to Casey Dellacqua earlier in the day, and she reflected on the match.

“I was disappointed today, frustrated really, in not putting my best tennis out on the court,” she said. “But in saying that, it would probably have surprised me if I did because everything is so new for me here.”

Not only that, she was running low on equipment, down to her last two racquets and with a bag donated by Sam Groth, whose family Bengson and her mum are staying with in Melbourne this week.

Leading up to the play-offs, Bengson was doing well on the ITF tour with the highlights a quarterfinal singles berth in Kalgoorlie along with several doubles titles including Mt Gambier, Traralgon and Bendigo, plus a final in Darwin where she and partner Tyra Calderwood took out Casey Dellacqua and Olivia Rogowska along the way.

But she certainly wasn’t expecting entry into the wildcard play-off.  In fact, she had earlier told her mum, “I’d love it, but I’m not getting my hopes up.”

Returning home from a practice hit one evening, she knew the last four spots had yet to be given out, but wasn’t thinking much about it.

In her words, “I hopped online and thought “hang on, is that my name?” “

Twenty-four hours later, she was in Melbourne and the rest is history.

Bengson’s junior career was not as star-studded as some, but after completing HSC, her passion for tennis remained, and she made the decision to try and further her career in the US college system.

“I knew I wanted to keep playing, [but it was a] hard decision because where do you go in Australia if you are not at the top? I also wanted to study, and I knew [at a US college] I could play tennis as well as get my education paid for, so it was the best of both worlds.”

Bengson put together her own application, and before long the University of Idaho knocked on the door. Bengson held out though, opting eventually for California State University at Long Beach.

“I knew I would be happy in California,” she says with a grin. “I don’t like the cold much.”

She was right. Before long Bengson was in the Californian sunshine, playing the sport she loved, majoring in psychology, and even riding a longboard.

“It was an interesting experience and I loved it,” Bengson said. “I grew up really quickly. The tennis was fantastic – and it was a good chance to gain some independence.”

After four years at college, Bengson returned to Australia and immediately felt the come down.

“I was a little bit lost to be honest. It was hard. The majority of my close friends were back in the US, and I realised I didn’t really know anyone.”

Once again, it was tennis to the rescue. Bengson found old friends on the tennis court at her local clubs.

“Those people were really the ones I started hanging out with the most when I got back, they were fantastic,” she remembers.

Word got around that Bengson was back in town and she applied for a job at Tennis NSW as a Community Tennis Officer for the South East region.

“At that stage, I really didn’t know how to get back on the tennis track. It felt like I was back to square one. I hadn’t given up the dream but I had lost a little hope.”

Bengson was lucky though as, via her new job, she was still hitting with the top juniors in her area.

“I understood the importance of bringing along the next generation of players,” she said.

In fact, it was after one of the mums asked Bengson to accompany her daughter to a tournament in Darwin that the decision to fully commit to tennis again took hold. Bengson agreed to make the trip and ended up winning both singles and doubles.

“I started thinking about how much I really missed it,” she said. “I didn’t want it to be something I regretted for the rest of my life.”

Bengson started playing tournaments again and watched as her Australian ranking improved from the high 400s to inside the top 50. In May this year, she resigned from her role at Tennis NSW, put in some extra training, and headed overseas to chase a world ranking. After some good performances in Italy and Thailand, she achieved this goal and headed back to Australia, seeing more success on the Australian Pro Tour, which ultimately led to her acceptance into the play-offs.

With the event now over for her, Bengson realises she has hit her milestones a little quicker than expected.

“I really need to reset those goals a little now,” she says. “Everything has happened so quickly.”

“I’m taking it in my stride but … it can be a bit overwhelming.”

“What do I do next? What tournaments should I play?”

At the moment, she plans to stick around for the summer of tennis in Australia before heading back overseas.

“I’d love the opportunity to play at any of the upcoming events. Sydney would be great. It’s home territory so that would be nice.”

Bengson also hopes her story will inspire a few South Coast kids back home to do well too.

“There will be those who have seen my face around at Tennis NSW,” she says.

As far as the future goes, Bengson is putting no pressure on herself.