Update 5:30 pm. The story of Sir Norman Brookes was officially immortalised today with the launch of his biography The Wizard at Melbourne Park. 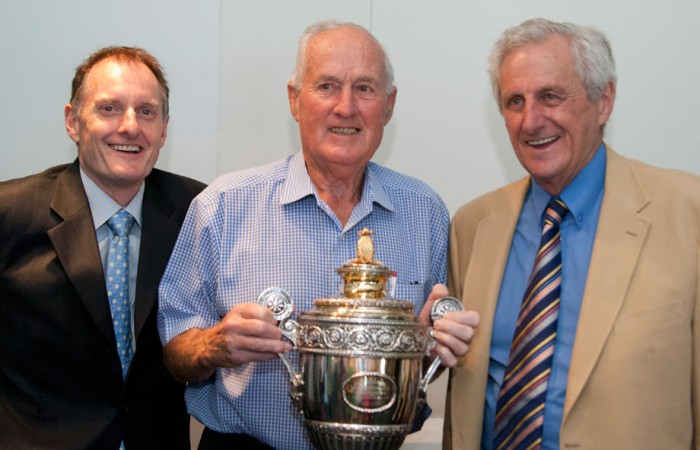 The story of Sir Norman Brookes was officially immortalised today with the launch of his biography The Wizard at Melbourne Park.

Brookes’ long list of achievements was celebrated in front of a gathering of tennis luminaries including Australian legends John Fitzgerald and Neale Fraser.

He was the first foreigner to win the coveted Wimbledon title and guests were given the rare opportunity to see his original Wimbledon trophy.

The book gives an insight into the life and times of Brookes, from winning Grand Slam and Davis Cup titles to serving for Australian during World War I.

Former Tennis Australia President Geoff Pollard said it was important Australians understood the history of tennis and our sporting greats.

“I think for any organisation, your history is the basis of your future and no organisation as much as Tennis Australia owes its present to its past history, its past champions and to Norman Brookes in particular,” he said.

“Norman Brookes not only put a young Australia on the map when he beat the giants of America and Britain, but he also left us a legacy of mass participation in the sport of tennis and a legacy of Grand Slam status for the Australian Championships.”

Brookes has been described as “the greatest tennis genius the world has ever known” by Bill Tilden who was a dominant player during the 1920s. He is also known as the founding father of Australian tennis.

After winning Wimbledon in 1907, Brookes turned his attention to leading Australia to the top of the tennis world in Davis Cup.

Following his retirement, Brookes went on to lay the foundations for Australian tennis when he was appointed the president of the Lawn Tennis Association of Australia in 1926. He remained in the position until 1955.

Grandson Norman Gengoult-Smith paid tribute to his grandfather and said it was a great honour to finally have this part of Australian sporting history published.

“It is really wonderful because I’m so proud of my grandfather and it’s just mysterious that it was never done before. I’m very proud and it’s a very emotional moment,” he said.

“Although he was always mentioned in other people’s books, he was never in one of his own and it’s just wonderful that it has now been done and it’s a part of the record,”

“He was a wonderful man who gave his life to tennis and loved it passionately.”

Mr Gengoult-Smith said his grandfather would have been pleased with the current status of tennis in Australia.

“He put tennis on the map in Australia and he created something that is probably the greatest and most widely participated sport in the world, tennis.“

Author Richard Naughton said he hoped the book would help inform a new generation of Australians about Brookes’ achievements.

“We wanted to make Norman Brookes interesting, relevant and accessible to the tennis community,” he said.

Mr Naughton said it was necessary to share the Norman Brookes story.

“I guess he is generally regarded as the father of Australian tennis and there was a big story to be told,” he said.

“Us calling Australia a Grand Slam tournament probably evolved from what he achieved during the 1930s and the president of the Lawn Tennis Association.”

> The Wizard can be purchased online