It was a mixed day for the seeds in the round of 16 of the girls’ Optus 16s Australian Championships today. 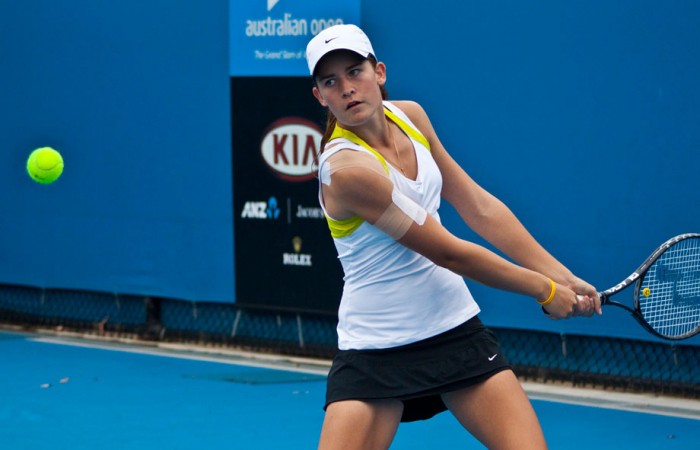 It was a mixed day for the seeds in the round of 16 of the girls’ Optus 16s Australian Championships today.

First seed Ebony Panoho struggled early in her match against Amy Sneath before recording a 3-6 6-1 6-1 victory in what was the only three-set match for the day.

The Queenslander said it was a tough match for her.

“After the first set I thought ‘OK let’s just keep it simple, start again’ and I just went from there.”

Panoho said lifting her first serve consistency played an important role in getting her back into the match.

“It was in my mind that I hadn’t been making a lot of first serves in the first set so I thought maybe that could be the key for the second and the third.“

In other results, second seed Astra Sharma progressed to the semifinals stage with a 6-3 6-4 win over Paige Hourigan as did third seed Brooke Rischbieth who accounted for Angelique Svinos 6-4 6-4.

The news was not as positive for the remaining seeds who all lost their round of 16 encounters.

Queenslander Sara Tomic had a hard-fought 7-5 7-5 victory over sixth seed Georgiana Ruhrig while Brigitte Beck recorded a 6-3 6-2 win over the seventh-seeded Andrea Dikosavljevic.

Fifth seed Lyann Hoang was forced to retire in her clash with Alexandra Osborne after the first game with a twisted left knee.

On the boys side of the draw there was better news for the seeded players with three of the four advancing to the semifinals.

First seed Li Tu cruised to a 6-3 6-0 victory over Jacob Grills and the second-seeded Jay Andrijic recorded a 6-4 3-6 6-3 win over Victorian Joshua Tran.

Daniel Guccione was the only seed to be knocked out of the round of 16. The Victorian lost a tight three-set match with Vuk Velickovic 5-7 7-5 6-2.

The 12s teams’ semifinals kicked off today with the Victorian boys and girls teams both winning their ways through to the final.

In the boys’ team event first seed New South Wales was up against the second-seeded Queenslanders in what is traditionally a state of origin clash.

New South Welshman Bernard Nkomba got his team off to a winning start in the first rubber with a 7-6 6-2 win over Alexander Cmokrak.

It was a different story in the second rubber as Queensland was able to equalise with a 6-3 6-2 win to Daniel Groundwater against Ricky Hijikata.

Nkomba then teamed up with Kody Pearson to win the deciding doubles and consequently take out the tie for NSW.  The pair defeated Cmokrak and Adam Watton 6-4 6-0.

In the second boys semifinal, Victoria defeated the West Australian team after the two singles rubbers.

The results mean Victoria will clash with NSW tomorrow in the final.

Aleska Cveticanin got Queensland off to a flying start with a 5-7 6-0 6-1 win over China’s Zhao Lee.

The tie was forced into a deciding doubles rubber with the Chinese pair of Zhao and Tang taking out the match 6-7 6-2 [10-3] against Cveticanin and Somer Dalla-Bona.

In the second semifinal, Victoria also posted a victory in three rubbers over the South Australian team despite a slow start.

Victorians Fourlis and Vivian Fidantsis then teamed up for the doubles against the South Australian pairing of Hule and Selina Turulja. The match was a gruelling encounter in the heat. The Victorian pair eventually taking the rubber 4-6 6-2 [10-6] and will play China in Friday’s final.