The semifinals line-up at the women’s 2012 Australian Open Wildcard Play-off was completed this afternoon, with Bojana Bobusic and Olivia Rogowska joining Ashleigh Barty and Arina Rodionova in the last four at Melbourne Park. 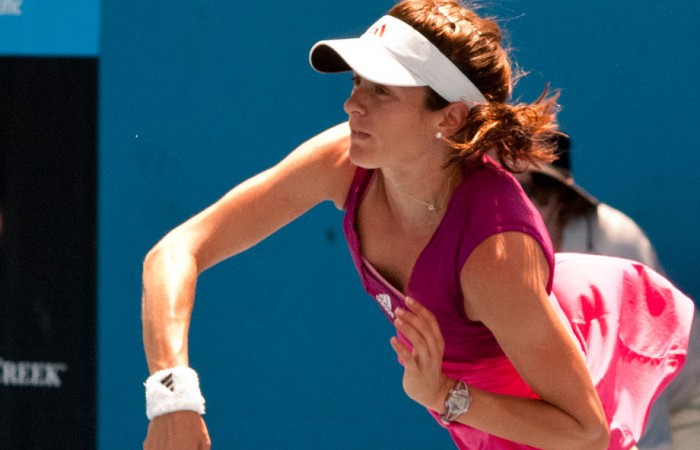 The semifinals line-up at the women’s 2012 Australian Open Wildcard Play-off was completed this afternoon, with Bojana Bobusic and Olivia Rogowska joining Ashleigh Barty and Arina Rodionova in the last four at Melbourne Park.

Bobusic became the third semifinalist to progress after a gruelling battle on Court 5 against Viktorija Rajicic, the result determining the final order of a delicately placed Group D.

With all four players in the group – Bobusic, Rajicic, Sally Peers and Storm Sanders – having each won and lost a match, the tension was high as the players simultaneously fought to keep their hopes in the event alive.

Peers took on Sanders on Court 6 and romped to a 6-1 6-2 victory, handling the hot and blustery conditions far better than her powerful yet erratic opponent.

“I was really pleased with how I was able to control her aggression and her power and use it to my advantage,” Peers said.

The fourth seed said she was immediately heading to Court 5 to watch the conclusion of the Bobusic–Rajicic match, yet had little idea as to what combination of results would determine the semifinalist from her group.

“I was just going out there [during my match] and focusing on what I needed to do, and I needed to win that match to have any chance,” she said.

“I’ve done all that I could – I won in two sets. So we’ll see what happens from there.”

Peers needed a Rajicic victory to qualify, and very nearly got her wish when Rajicic went ahead 5-3 in the final set and served for the match. Having won the first set yet dropping the second and falling behind a break early in the third, it was a magnificent effort from the young Victorian to haul herself back into contention and come extremely close to victory.

But Bobusic’s experience – at 24, she is seven years older than Rajicic – paid off in the closing stages of the match. With double faults and errors hurting Rajicic, the fifth seed levelled the final set at 5-5, and dominated the ensuing tiebreak to record a 4-6 6-3 7-6(2) win.

Unlike Peers, Bobusic said she had a bit of an idea about how results had to fall to ensure her progression to the semifinals.

“But I honestly did my best not to think about it, I think if I had my head wrapped around it I probably would not have gotten through today,” she said.

“I just tried to get through [this] match and whatever happened, happened.”

Despite Bobusic and Peers finishing on an equal record of two wins and one loss in the round-robin stage, Bobusic qualifies for the semifinals thanks to her defeat of Peers yesterday. The fifth seed said she goes into the knockout stage of the event full of confidence.

“I’m just going to give it a good crack … I’ll just do my best and see what happens,” she said.

Rogowska finished atop Group B with a perfect 3-0 win-loss record, coasting into the semifinals with a 6-0 6-4 win against talented junior Belinda Woolcock.

The second seed was simply too steady and consistent for the big-hitting Woolcock, and said she felt comfortable with the conditions at Melbourne Park.

“I always play well in the play-off. I [have] good memories … and some good wins,” said Rogowska, the winner of last year’s play-off in a tight final against Jelena Dokic.

“I train here so I have a home advantage … so that’s probably why I play well.

“I thought I did well and played well on the important points … I thought I served really well today and I think that helped me get through.”

With the women having a day off tomorrow, Rogowska said she planned to have a light hit and stay relaxed by catching a movie.

The women’s semifinals will be played on Saturday, with Barty taking on Rodionova and Rogowska battling Bobusic.