Michael looks ahead to the quarterfinals

Update 4:30 pm. With the sun beating down on Court 8, the round of 16 Australian Open 2012 Play-off match between fellow Queenslanders Michael Look (8) and Isaac Frost always looked set to be an interesting encounter. 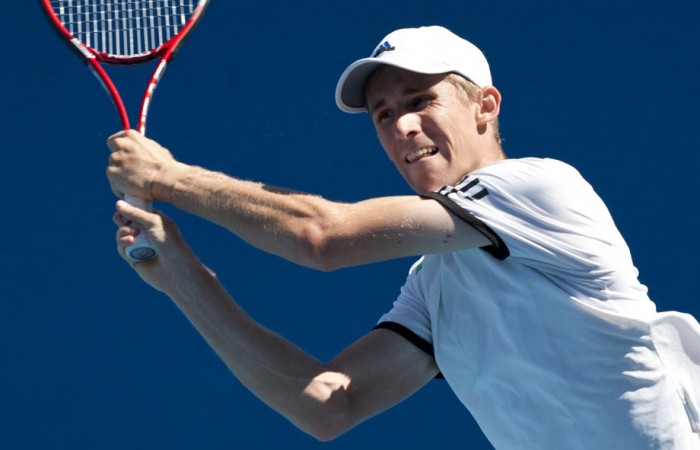 With the sun beating down on Court 8, the round of 16 Australian Open 2012 Play-off match between fellow Queenslanders and hitting partners Michael Look (8) and Isaac Frost always looked set to be an interesting encounter.

Despite having lost his past two matches against Frost, the consistency of Look eventually proved too much today, and after surviving a real scare, he was able to cruise past a wilting Frost in the final set, winning 2-6 7-6(4) 6-0.

Look, a 24 year-old UCLA graduate from Toowoomba, is currently ranked world number 349 and was a Futures event winner as recently as this October. His opponent, Isaac Frost, is a powerfully built 22-year-old, currently ranked 470, with a big serve and solid all-round game.

The match began in entertaining fashion, with some great shot making from both players as they each held their opening serves.  Both seemed happy enough to mix their games up, with some longer baseline rallies punctuated with some well-timed approaches to net.

Frost then upped the ante in the third game, asserting his natural big hitting with some terrific returns and giving himself two early break points, upon which he was able to capitalise on.

Look did his best to respond by taking Frost’s next service game to four deuces but he was unable to level proceedings as Frost held firm with some huge serves at pivotal moments.

From that point on, both players seemed more content from the back of the court and the rest of the set was played largely from the baseline with Frost’s more physical play dominating proceedings. With the early sting out of the match for the time being, Frost took the opportunity to pounce, racing out to take the first set 6-2 with another late break.

The second set opened with increased vigour from both players. Look managed to create some opportunities early but again, Frost was able to hold firm with his serve often getting him out of trouble.  However, the heat did appear to be taking its toll on him, and the consistency of Look was beginning to have an impact.

The rest of the set became a server’s paradise with both players hitting their marks and the rallies shortening. Just one point was won by the receiver in the next five games and in the blink of an eye the players were into a second-set tiebreak.

Look began the tiebreak very well, taking the opening two points. His greater experience seemed to be showing as he lifted his intensity markedly. Meanwhile, Frost continued to tire, the physicality of his game sapping his energy in direct contrast to his opponent, who appeared to be gaining in strength and momentum.

Look continued his dominance and jumped out to a 5-1 lead. Frost had an opportunity to get back into it with an easy pass on offer, but Look chose the right way and was able to pick off Frost’s forehand for a great saving volley. From there, Frost had too big a mountain to climb, and despite saving a couple of set points, was unable to hold out Look who took the tiebreak 7-4.

The final set highlighted the cracks that were beginning to appear in the Frost game. With errors flowing freely from his racquet – and the trainer even called early on – Frost’s big game crumbled in the heat. Look was then able to take complete control, ripping his way through the final set 6-0.

After the match, Look said that he felt a huge momentum  swing in the middle of the second set. “He was all over me early, then I managed to sneak in the tiebreak and the momentum just stuck with me from there,” he said.

“[This win] has done a lot for my confidence and I’m really hoping to keep it going.”

Next up, Look takes on another Queenslander who has also come through the US college system in John-Patrick Smith, who continued his great form with a straight-sets victory over Chris Guccione earlier today.

Look sees Smith as a “bit of a dark horse” in the event this week and isn’t surprised at all by his impressive results here to date.

“JP is a long lost Queensland buddy of mine,” says Look.  “I haven’t seen him for many years as we were on the other side of the country [at college] in America.”

“But I’m sure all boys from both UCLA and Tennessee will be following the score closely,” he says with a grin.