In a thoroughly engaging round of 16 play-off match today, Marinko Matosevic proved a little too steady for comeback kid Sam Groth as he prevailed in straight sets 6-4 7-6(6). 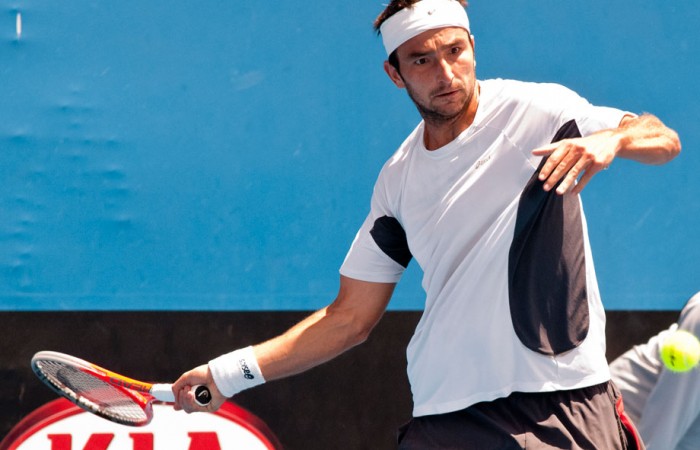 In a thoroughly engaging round of 16 play-off match today, Marinko Matosevic proved a little too steady for comeback kid Sam Groth as he prevailed in straight sets 6-4 7-6(6).

Having recently committed to reviving his tennis career, the latest version of Sam Groth cuts an imposing figure. Dressed in black right down to his socks and sweatband, his sleeveless top shows he has muscled up during his time playing Aussie Rules for Vermont in the Eastern Football League – and he’s added a little extra ink work for good measure.

On the other side of the court, second seed Marinko Matosevic looked completely focused on the job at hand. And in the end, despite some edgy moments with the umpire late in the second set, that composure was a large part of the difference. Matosevic was able to absorb the huge hitting from Groth and despite often just watching on as the ball flew past him for a winner, he was able to remain steady and win the contest at the crucial moments.

It was always going to be an absorbing battle, and the match provided a great spectacle for the decent crowd looking on. Both men served well and cracked winners but also followed up their solid work at the back of the court by finishing off points at the net with some crisp volleying.

As the first set progressed, Matosevic looked slightly the more consistent player with Groth often turning everything up to eleven as he tried to belt his opponent off the court.

Watching Groth play is like riding a rollercoaster; you feel every bump and experience every high and low as he pumps his fists and constantly talks to himself, often providing a running commentary of exactly what’s going on in his mind. If he actually had a sleeve, he’d certainly be wearing his heart on it. It’s a fun ride, no doubt about it.

As it was, despite Matosevic having a couple of early looks at a break, Groth was able to hang on, and it looked like we would need a tiebreaker to separate them.  However, at 4-4, Matosevic strung together some great tennis and earned himself a further break-point opportunity. This time, in typical all-or-bust fashion, Groth thundered two serves long and handed his opponent the game. After the change, Matosevic was able to easily consolidate and take the first set – with Groth offering a wasteful drop shot into the bottom of the net on set point.

Matosevic continued to stay the course at the beginning of the second, maintaining the intensity he had shown from the outset. Groth should be complimented as well, as he kept on coming, not backing off at all after the disappointment of the first set. However, it looked as though the energy required to keep his game at such a high level was beginning to ebb, and a few more errors started to creep into his game.

At 1-1, Groth found himself down two break points and despite saving the first, he lost the second after an unlucky net cord presented Matosevic with the easiest of passes.

After the change, Matosevic jogged back to the baseline looking sharp while his opponent hung his head. Seizing the moment, he held to love, sealing it with an ace.  But Groth certainly wasn’t done with yet, and he buckled down with a renewed vigour to not only hold serve, but break back and hold again to be in front 4-3 at the change.

During the eighth game of the set, Matosevic began for the first time to lose the cool that had served him so well to date. After a questionable line call, he started a niggling conversation with the umpire that continued into the change over and never really ceased until the match was finished. With Groth continuing to show his passion and leave nothing behind, it made for compelling viewing.

Matosevic eventually managed to break back and take the second set to a tiebreaker. His backchat with the umpire continued though after a series of line calls were brought into question. Meanwhile, in the breaker, Groth wrested an advantage at 5-4 with some exciting tennis, but then gave it away again with three errors on the trot. An ace at match point down kept him in it but he couldn’t hold on again at the second asking.

Matosevic, clearly relieved at getting through this dangerous match-up, let out a scream and sailed a ball over the crowd as he walked to the net to shake hands.

After the match, he had praise for Groth. “He’s got one of the best serves in the world and it’s hard to get a rhythm out there,” he said.

He now moves into a quarterfinal against young up-and-comer, Nick Kyrgios, who had an upset win over Matt Reid today. Matosevic said he knew little about him.

Hopefully, it will provide another entertaining affair.