JP finds a way past Guccione 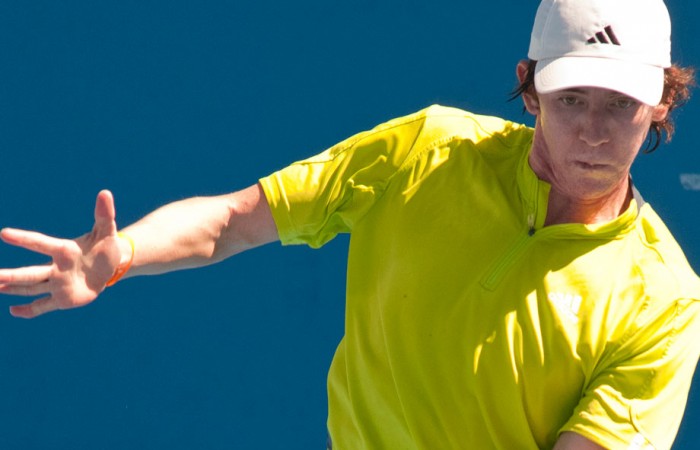 JP Smith continued his impressive return to the Australian tennis circuit after a stunning upset win over fourth seed Chris Guccione 7-5 7-6(3) in the Australian Open 2012 Play-off.

The two players had not faced each other previously but it was Smith who combated the 201 cm Guccione’s monster first serve in impressive fashion.

Smith, ranked 441 in the world, said the round of 16 win was one of his most memorable to date.

“It’s definitely one of my best wins,” he said.

“I have a lot of respect for “Gooch” and the way he handles himself and plays the game.”

Well aware of the blinding serve he was up against, Smith said he was pleased with how he handled his returns and kept points alive.

“I played well today. I made a lot of returns, that was one of the goals, and I made him play a lot of ball,” he said.

Smith kicked off the match in style after breaking his opponent in the opening game, despite saying only yesterday how difficult the prospect of facing Guccione’s serve would be.

But it didn’t take long for Guccione to find his rhythm and get his booming first serve going.

The third game saw the 26-year-old start firing his shots down the tee and approach the net, forcing Smith to play from well behind the court.

At 2-2, Guccione faced another two break points after consecutive unforced errors at the net but held his nerve to hold serve and take out his third-straight game.

Smith struggled on numerous lob attempts, failing to get enough height on the ball and allowing the 6’7 Guccione to smash the ball away.

But the younger Queenslander was quick to alter his game plan and began hitting a low ball whenever Guccione approached the net, forcing a handful of unforced errors.

While Smith’s first serve wasn’t as punishing as Guccione’s it proved just as effective, as he took it right up to the fourth seed through precise ball placement and aggressive serve-volleying.

A crucial break to Smith with the game locked at 5-5 came as a result of a diving Guccione forehand that landed short – and high – allowing Smith an easy winner.

Smith capitalised on his chance as he served impressively yet again, taking out the set 7-5 in fitting style with an ace at 40-15.

The two left-handers traded service games throughout most of the second set in a stunning display of aggressive, powerful strokeplay.

Two missed volleys and a huge shank saw Smith down a break point in the second game but he quickly redeemed himself via a swift backhand winner down the line, followed by two monster serves to level the score at 1-1.

Smith continued to attack the Guccione serve by standing further inside the court and began to use the net to his advantage, keeping his groundstrokes deep.

Guccione had a golden chance to take out the set in the twelfth game, but a poor forehand volley attempt at 30-30 denied him of any chance as Smith held serve, levelling the game at 6-6.

More crucial unforced errors from Guccione in the tiebreaker saw Smith take a 4-1 lead and a stranglehold on an upset victory.

The Queenslander ensured nerves didn’t restrict his confidence as he eventually took out the second set, and the match, on a huge serve leaving Guccione to wonder where it all went wrong.

A characteristically chirpy Smith after the match said the one aspect he found most troublesome was trying to lob his 201 cm opponent, an issue he took in good humour.

“It probably wasn’t the greatest idea,” he said with a laugh.

“I think it worked once out of probably 10 times but I’ll take that percentage now.”

Smith takes on eighth seed Michael Look who came back fron a set down to oust Isaac Frost 2-6 7-6(4) 6-0 in the quarterfinals tomorrow.