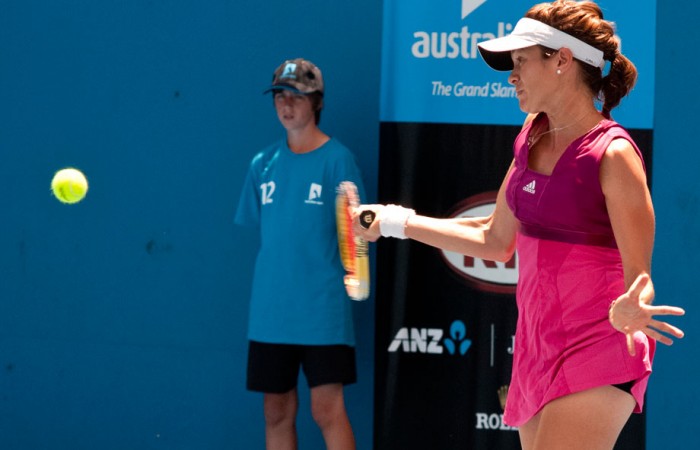 Bobusic, who has yet to qualify for a spot in the main draw of the Australian Open, outclassed her fourth-seeded opponent both physically and mentally as she surged back into contention in her pool.

Only seven spots separates the WTA rankings of the two players – Bobusic at No.238 and Peers at No.245 – but it was the 24-year-old Bobusic who looked the far superior competitor.

It wasn’t the first meeting between the two young women and Bobusic said she was ready for a challenging match.

“Playing Sally’s always tough, I’ve played her a couple of times this year and haven’t [been] able to get the win,” she said.

“But I had a game plan and executed it really well today.”

Bobusic said her positive start to the match helped her gain confidence and get the ball rolling.

“Getting that momentum right from the start’s really important and I managed to keep it up, which I’ve been working on and I kept it going which was really good for me today,” she said.

“But Sally never gives up so I knew I’d have to get that last point to win.”

Bobusic – who reached the final of five ITF events in 2011 – ensured her strong form was evident early as she raced away to a quick 4-1 lead.

Peers broke back with some delicate touch and a perfectly executed crosscourt backhand winner but it was a short-lived victory.

She negated her positive play by immediately dropping her own service game with the help of a perfect Bobusic drop shot alongside a string of critical unforced errors.

Frustration was slowly amassing for Peers who at 2-5 down let herself – and the small crowd – know all about her discontent. Following a wayward backhand return down the line, she stared sternly at her strings and loudly inquired why she didn’t hit the ball crosscourt.

A rare double fault from Bobusic kept hope alive for her opponent, but a plethora of unforced errors from 20-year-old Peers saw the WA native storm towards the finish line.

Peers’ frustration was on display again as she continued to spray shots wide or into the net, as she began to not only battle her opponent, but also herself.

Her dip in confidence was evident in the fourth game after Peers committed four consecutive unforced errors, handing Bobusic a free game and a 4-1 lead.

The composed Bobusic lifted a gear as her opponent wilted, stepping into her shots and going for the sidelines with great success.

A few minor mishaps late in the match didn’t dampen Bobusic’s spirits as she surged past Peers to take out the second set 6-2 and walk away with a convincing win.

Bobusic will play 17-year-old Viktorija Rajicic tomorrow in the final match of the round-robin draw, a game she’s not taking lightly despite the major age difference.

“I’ve played Viki once this year and gotten the win, but every day is different,” she said.

“She’s a really good player, hits the ball really well and is a great junior so I know it’ll be tough.

In other results, Ashleigh Barty continued her red-hot form after making light work of Stephanie Bengson, winning 6-2 6-4 and putting the 15-year-old in good stead to reach the knockout rounds.

Top seed Casey Dellacqua made amends for her shock loss to Barty yesterday after dropping only one game in her clash with eighth seed Emelyn Starr, winning 6-1 6-0.

Queensland’s Rachel Tredoux was forced to withdraw from the event with an abdominal strain with ACT’s Alison Bai taking her place.

But Bai was not given an easy task, facing sixth seed Arina Rodionova today, who cruised to a 6-0 6-4 win and put herself in prime position to advance to the knockout stage.