JP ready for the next test

John-Patrick Smith, or "JP' as he's more commonly known, sits casually in his chair next to his hitting partner at Melbourne Park, leans back and twirls his racquet around his finger. 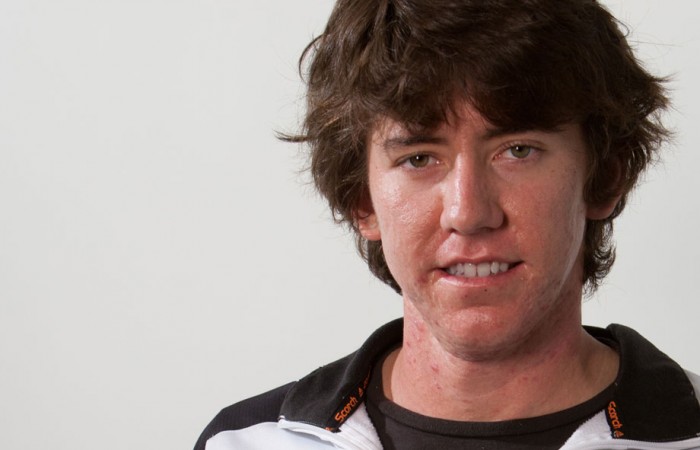 John-Patrick Smith, or “JP” as he’s more commonly known, sits casually in his chair next to his hitting partner at Melbourne Park, leans back and twirls his racquet around his finger.

The two young men exchange a laugh and engage in a not-so-serious conversation as they get ready to begin their next short burst of high-intensity training.

It was a casual conversation, yes. But Smith leaves such casualness off the court. When he steps up onto the Plexicushion, it’s with intensity, focus and grit.

That’s not to say Smith is an intense character. Quite the opposite, in fact.

Following his practice hit yesterday, Samantha Stosur steps onto the court to begin her workout. Smith beams, approaches her with great confidence and happily introduces himself.

Extroverted, approachable and getting his name out there.

The 22-year-old kicks off the opening round of the Australian Open 2012 Wildcard Play-off at Melbourne Park today in hope of securing a spot in the main draw of the 2012 Australian Open.

Smith is up against some of the best male tennis players in the country and is going into the event with a positive mindset.

“Win or lose, it’s always a great experience to take away what you can learn from these players,” he says.

“Hopefully it’s a good week in tennis and I’m just looking to finally getting out on court.”

But Smith – currently holding an ATP ranking of 441 – hasn’t built his career on home soil.

Straight out of high school four years ago, Smith wasn’t physically or mentally ready to compete and play tennis full time. So he packed his bags and headed north to the University of Tennessee (UT) in America.

“I needed direction and pushing, and that’s why the college system is so great because you have those sorts of people in your corner always pushing you to be a better person as well as a tennis player.”

The change of scenery paid off for Smith. After four years making an outstanding name for himself in college tennis, he returned home earlier this year boasting a plethora of awards and honours – 44 since 2008, to be exact.

And an economics degree to go with it.

His most distinguished honour came this year when Smith was voted the South Eastern Conference (SEC) Athlete of the Year – only one of four males in UT history to do so.

The last male athlete from UT to receive the award was Indianapolis Colts quarterback Peyton Manning in 1998 – one of America’s most well-known and established athletes.

“It was a great honour, and it’s definitely something I’ll always hold myself to,” he says.

The achievement didn’t go unnoticed, either. In early November, Smith was honoured at halftime of a UT football game at Neyland Stadium in front of more than 100,000 people. It was an experience, he admitted, that words simply can’t describe.

But it wasn’t always smooth sailing for Smith. Despite bursting onto the college tennis scene in his Freshman year, Smith had to adjust to the different – and more hostile – tennis etiquette in America.

Heckling, yelling, talking through points. Even the odd spot of abuse.

“That’s what makes college tennis so tough, you’re not only dealing with your opponent but you’re also dealing with the crowd,” he says.

“And of course the fraternity guys up back making fun of you. It’s things you don’t really experience on a normal basis.”

But Smith took it all in good humour and learnt to embrace the college atmosphere.

“You’ve got to take it in your stride,” he says.

With his time in the college system coming to an end, Smith returned home to Australia, degree in hand, to focus on tennis full-time.

“It’s been a good couple of months that I’ve had on tour so next year I’m just looking forward to setting new goals, and hopefully I can take on as much as I can,” he says.

But tennis isn’t the be-all and end-all for Smith. Like all elite athletes, he needs his down time.

As a Townsville local, he grew up a passionate supporter of the North Queensland Cowboys, and is looking forward to rekindling his love for the team now he’s back in Australia .

“I live and die by those boys up north,” he says with a laugh.

“I’ve always been a big advocate for that team.”

“I don’t know him too well but he’s played well and he’s had some good results in the US. It’ll definitely be a good match and I’m looking forward to it.”

While he’s not necessarily looking any further than his opening clash, challenges will be aplenty for the 22-year-old if he advances through to the second round.

Awaiting the winner of today’s game is 201 cm Chris Guccione  – a well-known figure who is no stranger to the Australian Open after six appearances since 2004.

Watch live streaming of the Australian Open 2012 Play-off beginning at 9:45 am, right here on tennis.com.au.