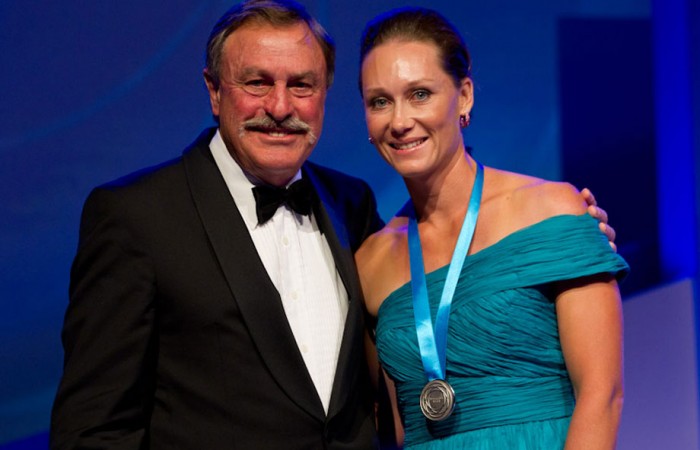 The US Open champion was presented with the award by its namesake, John Newcombe, in front of more than 700 people at Crown’s Palladium Ballroom.

The other nominees in the mix for the award – Jarmila Gajdosova, Matt Ebden and Bernard Tomic – all had solid claims on the honour, but Stosur’s US Open crown was the knockout punch that delivered her the title.

“It’s such an honour to win the Newcombe Medal again this year, and to have so many legendary Australian players here in the room tonight makes it even more special,” Stosur said.

“Although my year didn’t start out as well as I may have wanted, it’s great to know that if you keep working hard and believing in yourself the rewards will come.”

Stosur’s US Open triumph proved to be that reward during an at times frustrating 2011 season.

Earlier than expected exits at the Brisbane International, where she fell to countrywoman Jarmila Gajdosova, the Australian Open and disappointing results in Australia’s Fed Cup tie versus Italy, were not what Stosur was hoping for.

True to form though, Stosur fought back. A final at Rome on clay gave not only Stosur but her legion of fans hope as the players put the finishing touches on their preparations for Roland Garros.

A semifinalist at the second Grand Slam tournament of the year in 2009 and a finalist in 2010, many tipped Stosur to take the next step in 2011.

But it wasn’t to be. A shock loss to Gisela Dulko in the third round had the 27-year-old making a beeline for the grass courts of Eastbourne earlier than predicted.

Again, Stosur’s form leading into a major was misleading, she was unable to replicate her semifinal showing at Eastbourne and was bounced out of Wimbledon in the opening round.

Stosur was quick to put the loss behind her and re-set for the US hardcourt season. And the change of scenery was just the tonic she needed.

Her loss in the Toronto final to Serena Williams proved to be a dress rehearsal for the biggest win of her career, which was just around the corner.

“Winning the US Open is of course the pinnacle of my career to date, and to be able to share my success with everyone here tonight is fantastic,” said Stosur.

“I’d like to thank my amazing team, specially my coach Dave Taylor, who has never stopped believing in me, even through the tough times – and there have been a few – along the way.”

Stosur also acknowledged the success of other Australian players, including winners of the Junior Athlete of the Year award – Ash Barty and Luke Saville.

“It’s been a great year for tennis in Australia – with Ash and Luke winning at Wimbledon and Bernard [Tomic] doing so well, and hopefully this is just the beginning of more success to come.”