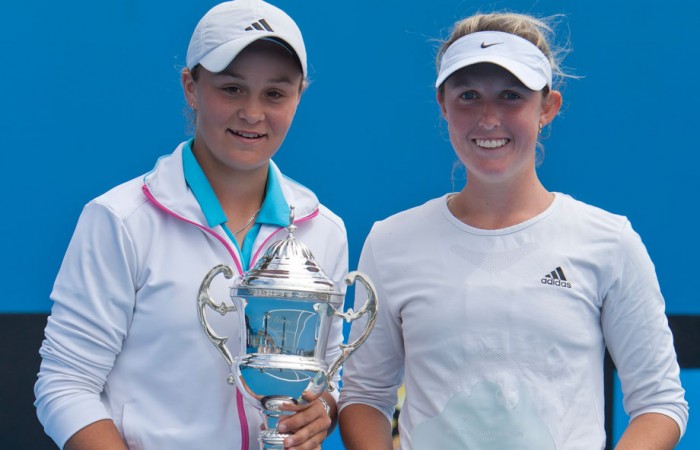 The Queenslander was by far the steadier player in the extremely gusty conditions out on Court 6 and, with her opponent going for broke on every available occasion, she held firm throughout the match.

It was a shaky beginning for Barty though, as her West Australian opponent raced to 0-40 in the opening game and eventually took the first two games of the match.  Barty then found her composure, and started running Sanders around the court with some very steady work from the baseline. The powerful Sanders obviously planned to come out and try to hit her shots today and while it worked very early on, Barty’s consistency started to draw more and more unforced errors as the set wore on.

The trend continued, and while Sander’s big hitting sometimes caused Barty to scramble, she was in control of most rallies and eventually only dropped one more game from her 0-2 deficit, taking the opening set 6-3.

The second set began in similar fashion, and the unpredictable wind only played further into Barty’s hands. But despite the uphill battle Sanders was now facing, she continued to go for her shots, perhaps with even more vigour, and she gave herself plenty of chances with several break-point opportunities in Barty’s early service games.

But Barty just seemed to have all the answers today, and she played the critical points extremely well, racing to a 5-1 advantage and then taking the title with an exclamation point, breaking Sanders to close out the second set, and take the match 6-3 6-1.

After the match, Barty acknowledged the difficult conditions but was very pleased with how she played.

“It was really tough out there today,” she said. “I know Stormy didn’t play her best but I played really well.”

“I was able to control my ball in the wind a little bit better and stay a little steadier throughout the match.”

Both Barty and Sanders now have the opportunity to compete in the Australian Open 2012 Play-off this coming week with the prize of a spot in the main draw on offer.

Barty has an intriguing match against Casey Dellacqua in the round-robin stage and she is relishing the opportunity. “Yeah, it should be fun. I’m not expected to win by any means so I’m just going to go out there and have some fun.”

Many will have their eye on how the junior Wimbledon champion squares off against the more established players.