Storm Sanders’ performance in the Optus 18s Australian Championships quarterfinals was in keeping with her given name, with the Western Australian thundering past Ashley Keir for the loss of just one game. 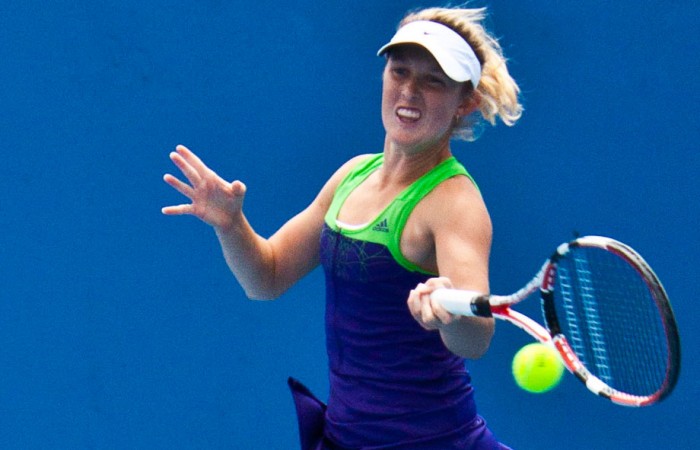 Storm Sanders’ performance in the Optus 18s Australian Championships quarterfinals was in keeping with her given name, with the Western Australian thundering past Ashley Keir for the loss of just one game.

The second-seeded Sanders was undefeated in round-robin play and continued her excellent form against Keir on Court 5, powering winners from the baseline and remaining calm and focused despite the wind throughout the 6-1 6-0 victory.

Although the pair had never previously met, Sanders said she had been expecting a tougher battle entering the match.

“I obviously knew that she loves [the ball] in her hitting zone, so I was just trying to mix it up, throw a few slices in, hit a few high balls and, if I got the right shot, try and go for it and be aggressive,” she said.

“That’s the way I usually play – I like hitting winners and being aggressive … but she gave me a lot more short balls than I was expecting so I was able to hit a few more winners than I thought.”

Those winners were flowing off Sanders’ racquet from the very first point, with the left-hander viciously striking her forehand on her way to an early break and a 3-0 lead. Keir got on the board in the fourth game with a gritty service hold, celebrating with a loud “C’mon!” and showing she was ready for a fight.

But the second seed simply had too much firepower and was the more emotionally steady player throughout the opening set. Hitting strongly from the back of the court, Sanders also benefited from Keir’s often wayward groundstrokes and increasing frustration.

Serving for the set, Sanders closed it out strongly with yet another forehand winner, this time thanks to a powerful first serve that drew a short reply.

Keir’s steady flow of errors continued in the second set, helping Sanders to an early lead. Sanders increased that with a forehand winner and an ace to move ahead 4-0.

Zoning in on the finish line, the No.2 seed never let her intensity drop, her relentless ball striking from the baseline wearing Keir down. She smacked yet another forehand winner down the line for a 5-0 lead, then struck a backhand winner when serving in the next game to reach match point.

She progressed to the semifinals after Keir erred on her return, and said she was happy with her form as the tournament progressed.

“Hopefully I can keep up the good work, I guess … [I just want to] keep playing solid and aggressive when I can, and see how I feel on the day really,” she said.

Sanders will next face Viktorija Rajicic, who cruised through her match against the unseeded Andrea Dikosavljevic to win 6-3 6-3.

The fifth seed’s natural power was too much for Dikosavljevic, and her anticipation was sharp as well – she tracked down a well-struck drop shot and threaded a forehand winner down the line to break for a 4-1 lead in the second.

Despite surrendering her serve in the next game, she wrapped up the match shortly after to move through to the semis.

In the opposite half of the draw, top seed Ashleigh Barty recorded her most convincing win of the tournament, trouncing No.8 seed Ebony Panoho 6-2 6-0.

Barty, the 2011 Wimbledon girls’ champion, has not yet dropped a set in the event and progresses to a semifinal meeting against third seed Azra Hadzic, who came from behind to defeat Belinda Woolcock.

Hadzic was completely overwhelmed in the opening set and looked set to fall behind a break in the second when she went down 0-40 in the third game, before clawing her way back to deuce and eventually holding serve for a 2-1 lead.

It proved a definitive moment – Woolcock only managed to win one more game for the match as Hadzic completed a 1-6 6-3 6-0 victory.