Fifth seed Viktorija Rajicic has surged into the quarterfinals of the 2011 Optus 18s Australian Championships after defeating South Australia’s Brooke Rischbieth 6-2 6-0 this afternoon. 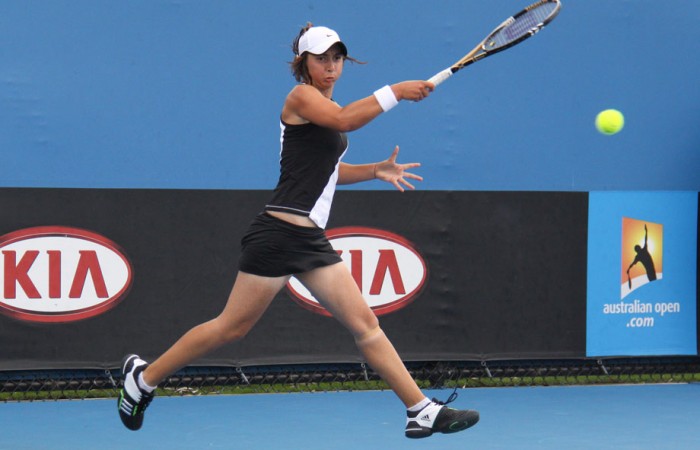 Fifth seed Viktorija Rajicic has surged into the quarterfinals of the 2011 Optus 18s Australian Championships after defeating South Australia’s Brooke Rischbieth 6-2 6-0 this afternoon.

After dropping the first two games, Rajicic put on a relentless display of aggressive tennis and won the following 12 straight.

Rajicic entered the match with fresher legs than her opponent after two straight-set wins prior to the clash, while Rischbieth had battled through two gruelling three-set matches.

Despite the slow start, Rajicic said she was pleased with her performance and decided to combat her early deficit by going for broke.

“I started off a bit rough and the wind was a bit strong so I had trouble controlling that, but I later got into it and started hitting the ball better and got used to her play,” she said.

“I started getting a bit angry early but I controlled that and just went for it.

“When you’re 2-0 down, you might as well just go for it, and just start every single point from scratch.”

Rajicic got off to a shaky start and appeared rattled, with Rischbieth playing with conviction and taking a quick 2-0 lead.

But a dominant service game from the Victorian fifth seed saw Rajicic regain her confidence as she started to go for her shots and take charge of the match.

With a 3-2 lead, Rajicic was ruthless in her groundstrokes triggering a string of winners including a penetrating forehand winner return and a swift crosscourt backhand, well out of Rischbieth’s reach.

The grey clouds and gusty breeze were no issue for Rajicic, who powered forward with deep shots forcing her opponent to play defensively from well behind the baseline.

Rajicic had trouble with her backhand slice early in the second set, often under hitting the ball and making a handful of unforced errors.

But this was quickly addressed as she held serve and promptly broke Rischbieth after a punishing forehand winner on break point. Rischbieth could do nothing but nod in approval, acknowledging her opponent’s strong play.

With the match well in her control, Rajicic stepped up her intensity yet again as she began to incorporate a mix of both power and finesse, often producing unreachable drop shots and sharp backhand slices.

Rischbieth lost all confidence as Rajicic rolled on, eventually taking out the second set 6-0 and securing a spot in the quarterfinals.

Despite the blistering performance, Rajicic said she still wants to sharpen her game – particularly her serve.

“I think the last couple of days and today I’ve just had trouble holding my serve, especially at crucial games,” she said.

“This happens when you serve for the match and you lose that service game and you have to break back. Once you get nervous your serve breaks down first.”

But the fifth seed said she’s pleased with her form and hopes it will continue in the finals.

“All the girls here are tough to play but I’ve just played well the last couple of days and hopefully I can carry that on.”