Update 7:15 am. The remaining quarterfinalists in the Optus 18s Australian Championships have been determined after the final day’s round-robin play. 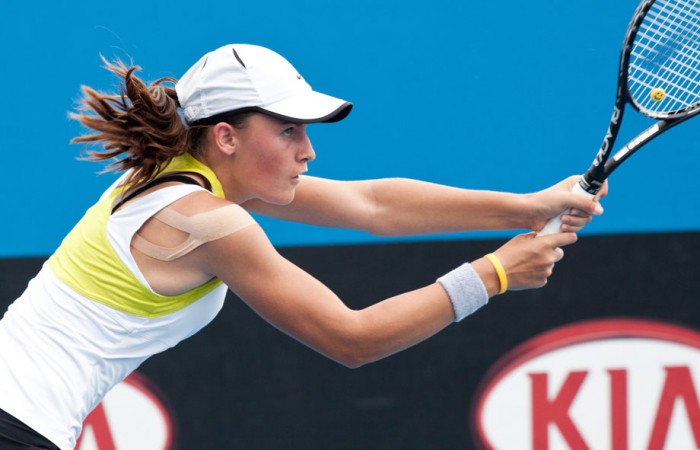 The remaining quarterfinalists in the Optus 18s Australian Championships have been determined after the final day’s round-robin play.

While most of the matches were straight-set affairs, some exciting three-set tussles were played out on the Plexicushion as players battled to keep their hopes in the event alive.

In the girls’ draw, seventh seed Ashley Keir and Astra Sharma were locked at one win and one loss apiece after their earlier matches, with the winner to join 2011 Wimbledon girls’ champion Ashleigh Barty as a quarterfinalist from Group A. Top seed Barty brushed aside Eliza Long 6-2 6-3 earlier in the day to go undefeated in the group.

Keir and Sharma battled on Court 8 for three tough sets, with Sharma lifting her game in the final stages of the second set to level the match. Pumped up and benefiting from Keir’s increasing frustration, the West Australian seemed to have all the momentum going into the final set.

Yet her errors proved costly. Keir held serve after an almighty battle in the third game, and gained in confidence as Sharma wilted, running out a 7-6 5-7 6-2 winner.

Ebony Panoho and Lyann Hoang fought out another group deadlock – this time in Group B – on Court 5, with Panoho moving through to the quarterfinals with a straight-sets win, 6-4 6-4.

In less dramatic circumstances on Court 6, Andrea Dikosavljevic coasted into the quarterfinals after a 6-4 6-2 victory over Isabelle Wallace. With both players also locked at one win each in round robin play, Dikosavljevic was by far the steadier of the pair throughout the match.

Despite losing the opening set, Wallace seemed poised to make her move in the second, her powerful left-handed game reaping several winners and helping her to 30-0 leads in three consecutive games. But her tendency to go for too much proved her undoing.

Dikosavljevic made good use of the moonball, inviting Wallace to overhit, and recovered from that deficit each time to run out a 6-4 6-2 winner.

She joins Belinda Woolcock as a quarterfinalist from Group D, who despite only having played two of her three matches had already progressed thanks to two straight-sets victories.

Also moving through to the final eight was third seed Azra Hadzic, who was far too steady for an erratic Alexandra Nancarrow throughout a 6-2 6-4 decision. Hadzic’s backhand was a mighty weapon – she used it effectively in the final set to push Nancarrow off the court and set up easy winners, or simply hit winners with it on its own.

Hadzic was the second quarterfinalist from Group C behind the undefeated Viktorija Rajicic. The Victorian maintained her perfect record with a dominant performance against Brooke Rischbieth, winning 12 consecutive games from 0-2 down to wrap up a 6-2 6-0 win.

On the boys side, a three-set battle was also required to break the tie in Group D, with James Frawley and Li Tu fighting for one hour and 36 minutes before Frawley eventually snared the second quarterfinal berth.

Tu looked destined to reach the final eight when he raced through the opening set without the loss of a game. But Frawley recovered, levelling the match and then holding his nerve in the final set tiebreak to record a 0-6, 6-2, 7-6(4) win.

Frawley progresses from Group D along with Ben Wagland, the No.6 seed defeating fourth seeded Mark Richards 6-3, 7-5 on Court 5 to go undefeated in round robin play.

2011 Wimbledon boys’ champion Luke Saville proved the loss in his second round-robin match was an aberration with a 6-3, 6-3 win over seventh seed Andrew McLeod. Saville’s conqueror, Chris O’Connell, also progressed to the quarterfinals with a 6-2, 6-2 victory against Jay Andrijic.

O’Connell, a wildcard into the draw, topped Group A with an unblemished win-loss record of 3-0, and is yet to drop a set.

Alexander Bolt and Andrew Harris recorded straight-set wins in Group B and C respectively to claim their second round-robin victories and qualify for the quarterfinals. Harris finished below Andrew Whittington in Group C after Whittington demolished Calum Puttergill 6-2, 6-1 to progress undefeated.

Despite a three-set loss to eighth seed Rhys Johnson, South Australian Brad Mousley had already ensured his place in the last eight from Group B.

Brad Mousley has been forced to withdraw from the quarterfinals due to injury. As Mousley’s withdrawal occurred before the release of the order of play for Friday, a shuffle was held to decide place finishers. The results are as follows: