Harris seals his place in quarterfinals

Fifth seed Andrew Harris has progressed to the quarterfinals of the 2011 Optus 18s Australian Championships, winning his final group match against Nicholas Kyrgios in straight sets. 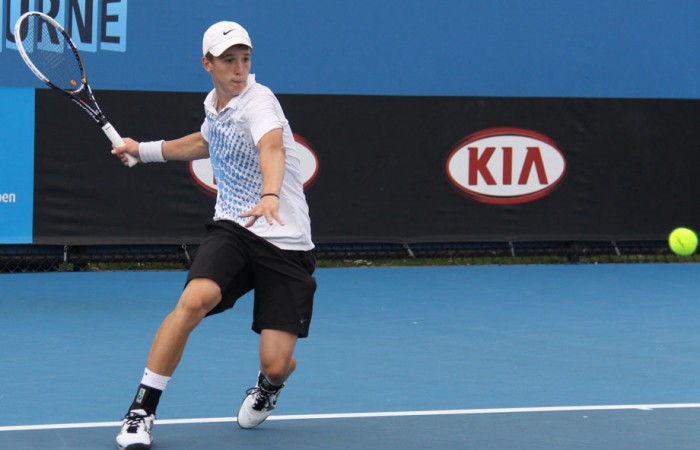 Fifth seed Andrew Harris has progressed to the quarterfinals of the 2011 Optus 18s Australian Championships, winning his final group match against Nicholas Kyrgios in straight sets.

With Harris and Kyrgios both having won and lost a match in earlier round-robin play, the winner of their clash would join No.3 seed Andrew Whittington as the top two players to progress from Group C into the knockout championship rounds. Given the cold, blustery weather and the pressure of the occasion, Harris said he was happy with his performance throughout.

“I played really aggressively and never really gave him gave him any opportunities to take the lead. I played well, and closed it out pretty well I thought,” he said.

“[The conditions were] pretty tough, especially serving with the wind and especially on the second serve with getting the ball toss right, but I managed the conditions pretty well and stayed mentally tough, and I got the good result.”

In a competitive opening set, Harris was the steadier player, eventually wrapping it up 6-4. Games went on serve in the opening stages of the second until Kyrgios went down in a bundle of errors in the sixth game to hand Harris a break.

The No.5 seed was a picture of calm and focus, using his powerful first serve to full effect and demonstrating controlled aggression on his was to consolidating the break to lead 5-2.

The vocal Kyrgios had become increasingly frustrated with his mounting error count, yet despite facing a major deficit he produced a solid service game to force Harris to serve for the match.

Harris made no mistake, acing Kyrgios on the first point, volleying a winner to reach match point and landing a huge first serve to force a return error, winning the match 6-4 6-3.

“I’ve played Nick a couple of times, and I know his game pretty well,” Harris commented.

“I knew that I had to come out and execute my game style well and be aggressive, try and get in the first big shot of the point. I knew from there I could take charge of the point and hopefully get the win, which I managed to do today.”

Harris said he would be focusing particularly on his serves and returns as he continues through the draw at Melbourne Park.

“[I’m concentrating on] staying committed and aggressive on the return, especially on the second serve,” he said.

“I usually win most of my points off my first serve, and if I can maintain a high percentage I think I can do very well.”