Kyrgios making a name for himself

Nicholas Kyrgios is a popular figure among his peers. 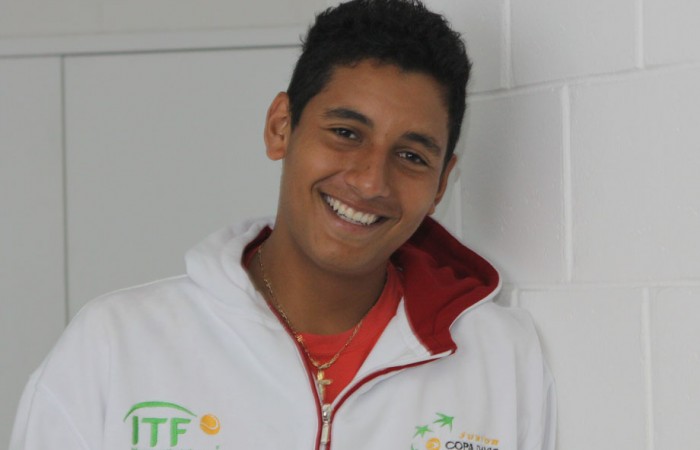 Nicholas Kyrgios is a popular figure among his peers.

As he leans casually against the wall in the Player Cafe at Melbourne Park while having his photo taken, two girls walk past and grin.

“Looking good, Kyrgios!” one of them says with a chuckle.

“You love it, Nick!” another one beams.

The 16-year-old, currently ranked No.30 in the ITF standings for his age, is a well-known player among fellow upcoming Australian tennis hopefuls, perhaps due to his outgoing and vibrant personality.

But more importantly, Kyrgios is making a name for himself on an international level with some impressive results, particularly in the past few months.

One of his career highlights came when he recently represented Australia at the Junior Davis Cup. He went through undefeated in his singles despite facing some fierce competition and helped his team take out a very respectable fifth place.

And he thrives on pressure – something many juniors struggle to cope with.

“You can take pressure in so many different ways,” Kyrgios says.

“You’re always on edge on court. It’s so much fun, I love the competitiveness.”

Currently playing in the Optus 18s Australian Championships at Melbourne Park for the December Showdown, Kyrgios was faced with a tough assignment in his opening round.

Up against third seed Andrew Whittington, Kyrgios went down in three sets and was simply outplayed late in the game.

“Me and Andrew are pretty good mates off the court so it was pretty tough playing him,” he says.

“He’s a tough player to play. He’s got a good serve and he likes to dictate a lot … I couldn’t really do much in the third.”

It’s perhaps his ability to perform well in high-pressure situations that makes him so good – or so he says – at one of his favourite leisure activities, playing the video game ‘Call Of Duty’.

When asked if he rated himself at the game, Kyrgios laughs and replied with a definitive “yeah!”

But in conjunction with his upbeat personality, Kyrgios remains a young man determined to succeed in his tennis.

He trains six days a week under the watchful eye of coach Todd Larkham. This is on top of extra gym sessions and, of course, school, which is jammed in between his early morning training and late afternoon workouts.

His sessions sometimes last up to four hours per day on the court alone.

But Kyrgios doesn’t seem too phased by it all. It is, after all, what he wants to do, and he acknowledges how important a strict training regime is.

“You pull up pretty sore sometimes, but I guess that’s what you have to do to make it,” he says.

His disciplined training program and work ethic is all a part of achieving his ultimate dream – a dream shared by many young tennis stars.

To be ranked number one in the world.

“I’m pretty sure for anyone who plays tennis, that’s the ultimate goal,” he says.

Kyrgios is currently sitting patiently in the Player Cafe, waiting for the rain to settle. He has a match scheduled later today against Calum Puttergill, one he feels reasonably confident about.

But it’s his singles match tomorrow that he’s truly excited for, as he faces his doubles partner and good mate Andrew Harris.

So does he think he’ll be able to take down his own partner?

Kyrgios laughs and shakes his head.

“My record isn’t too good against him,” he says honestly.

But if he can get firing with his booming forehand – a shot that Kyrgios says can “definitely win some matches” – alongside his driving double-handed backhand down-the-line, he’s in with a chance.

“I definitely think I’ve got a shot.”