The final round of the 2011 Optus 18s Australian Championship qualifying wrapped up earlier today with four exciting juniors advancing to the main draw. 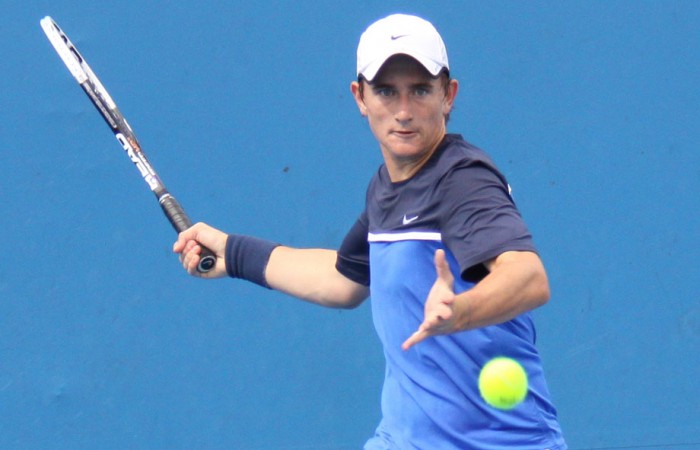 The final round of the 2011 Optus 18s Australian Championship qualifying wrapped up earlier today with four exciting juniors advancing to the main draw.

For the boys, South Australia’s Li Tu and Bradley Mousley won their singles games in straight sets and will look to build on their form in the 18s event.

Tu controlled a majority of the play in his 6-2 7-5 win over Tasmanian Harry Bourchier, often approaching the net and attacking with his swift one-handed backhand.

Clearly frustrating his opponent, the 15-year-old Tu worked tirelessly around the court and played the game on his terms but acknowledged the quality of his opposition.

“[Bourchier] has been playing really well. He only dropped five games to that match, so I knew I was in for a tough one and I’m just glad I played really well,” Tu said.

Bradley Mousley was also too strong for fellow South Australian Darren Polkinghorne, capitalising on some unforced errors and broke serve late to take out the game 6-4 6-3.

For the girls, Victoria’s Isabelle Wallace overcame a fiery Nives Baric 4-6 6-3 7-6(6) in a marathon match showcasing physical rallies and long games. After dropping the opening set, Wallace broke her opponent twice in the second and kept the momentum in her favour.

Eliza Long also came away victorious in her gruelling 4-6 6-2 7-6(5) match against Gussie O’Sullivan and reaped the rewards from playing aggressively and with conviction.

These players will join other top Australian juniors at the December Showdown when the Optus 18s and Optus 14s Australian Championships begin tomorrow at Melbourne Park.

In the 18s event, players will compete for a wildcard into the qualifying draw of Australian Open 2012 and the main draw of the Australian Open Play-off starting on 6 December.

For the girls, 2011 Junior Wimbledon Champion and Queensland Junior Sport Star of the Year Ashleigh Barty will feature alongside her 2011 Junior Fed Cup winning teammates Belinda Woolcock and Brooke Rischbieth.

Storm Sanders, Azra Hadzic, Rachael Tredoux and Viktorija Rajicic will also be in contention, among others.

Tournament Director Francis Soyer is expecting a high level of competition, especially when the opportunity to play in a Grand Slam is up for grabs.

“The Optus 18s event gives players in this age group an idea of what is required to become a professional tennis player,” Soyer said.

“Many of the players have competed against one another in junior tournaments and they will now enjoy battling for the chance to play in next year’s Australian Open.”

Previous winners of the Optus 18s Australian Championships include emerging players such as Sean Berman and Isabella Holland.