Juniors battle it out in Optus 14s qualifying

Some of Australia’s most exciting juniors were on court today to kick off the 2011 Optus 14s Australian Championships qualifying at Melbourne Park. 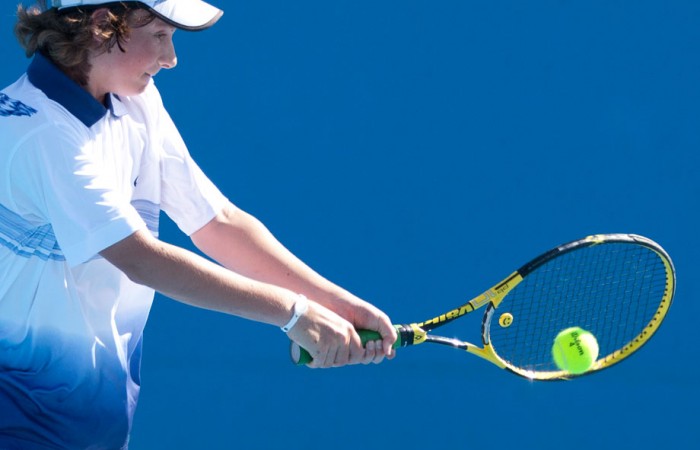 Some of Australia’s most exciting juniors were on court today to kick off the 2011 Optus 14s Australian Championships qualifying  at Melbourne Park.

As part of the December Showdown, budding young tennis players across the country faced off to try and claim a spot in the main draw for the under 14s event set to begin tomorrow.

Despite the heavy rain over the weekend, conditions were near perfect for the start of the 14s event with dry skies and little wind.

But Pratt, currently ranked No.817 nationally, stumbled in his second challenge going down to Daniel Nguyen 6-1 5-7 3-6, with Nguyen solidifying a spot in the main draw.

Second seed Bosko Novakovic also advanced through to the second round despite a major  scare from Alexander Bielinski, with Novakovic eventually taking out the match 4-6 7-6 (5) 6-3.

But much alike Pratt, Novakovic fell in the second round to 16th seed Zac Osborne going down 5-7 2-6, putting Osborne through.

One of the upsets of the day came when unseeded Michael Commings overcame fifth seed Zak Marshall 3-6 6-3 6-1 to advance to the second round, but was later eliminated by Joshua Ryan in straight sets.

For the girls, fourth seed Simran Shah claimed a spot as a qualifier after dropping only four games in two matches. Shah registered convincing wins over Melanie Lasslett 6-1 6-2 in the first round and Ysabel Preller 6-1 6-0 in the second.

Fifth seed Sophie Torcello also made it through to the main draw in style with a blistering first round victory over Heidi Olynyk 6-1 6-2 followed by a 6-0 6-1 win over Keeley Meijer – Torcello also conceding only four games.

But not all wins were as easy to come by with third seed Stephanie Ritson battling through a hard-fought match against Cassandra Moraleja, eventually coming away victorious in three sets, 6-4 5-7 6-1.