The 2011 Optus 14s Australian Teams Championships has once again brought together a unique blend of players from across Australia and New Zealand, but none so close knit as the Tasmanian boys’ team, managed by Simon Youl. 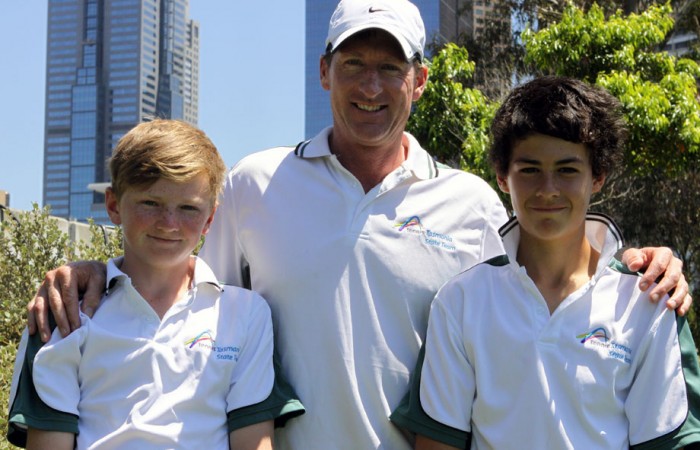 The 2011 Optus 14s Australian Teams Championships has once again brought together a unique blend of players from across Australia and New Zealand, but none so close knit as the Tasmanian boys’ team, managed by Simon Youl.

Youl is no stranger to the tennis court, retiring from the professional scene in 1994, having reached a very credible world ranking of 80 (in 1992) and twice winning singles events at the top level (at Schenectady in 1989 and Singapore in 1992).

His team at this years’ event includes his son, Tom Youl, and nephew, Hamish Youl (the son of Simon’s elder brother, Andrew).

Simon is quick to point out that, despite being the Tasmanian national coach and state selector, he is not responsible for the selection of the team at this week’s event. “I provide some of the facts, but I stayed well clear of the selection process itself,” says Simon. “It’s just the way it turned out.”

Judging from the camaraderie we’ve seen on court this week from the boys, not to mention the talent, it seems the right choices have been made.

Despite coming from different parts of Tasmania, Tom lives in Hobart while Hamish resides in Launceston, the boys see each other at tournaments and family gatherings during the year and they always relish the opportunity. They are coached separately though, with Tom able to take advantage of his dad’s experience all year round in Hobart while Hamish is coached by James Bolzonello out of the Launceston Tennis Academy.

Both Hamish and Tom have held their own in junior tennis this year, with Hamish the top-ranked Tasmanian boy in the 14s and Tom not far behind at number four.  They both also display a well-rounded temperament off-court and Tom, especially, is well-known as a bit of a larrikin with a mischievous glint in his eye. “He’s a great kid,” says his dad, Simon. “There’s never a dull moment at home with Tom around.”

As far as Hamish and Tom’s aspirations in tennis, they both clearly love the game right at the moment. “And that’s what matters,” says Simon.  “Being father and coach can provide a different set of challenges, but while Tom is enjoying it, we’ll continue to support him in doing what he loves.”

In talking to Tom, he says that “it’s great having dad coach me. He can coach me at home, so that’s really good.” A pause for thought.  “But it does get annoying sometimes!”

While we’re at it, let’s not forget the third member of the Tasmanian team, Nick Fader. Fader is clearly fitting in well with the Youl clan. “The funny thing is,” says Simon, “Hamish also has a brother called Nick.”

As for the teams’ competition this week, it’s been a great experience for all the boys, according to Simon, and they will take a lot away from it. “They’ve had a chance to play older, physically stronger players,” he said. “It’s definitely a learning curve.”

Next stop is the 14s Nationals, where Hamish is playing in the main draw and Tom will have to battle his way through qualifying. And if Tom can make it to the main draw, we may just see the Youl boys together on court once again, albeit on opposing sides of the net.