It’s Friday at Melbourne Park and that means semifinal action at the 2011 Optus 14s Australian Teams Championships. Overcast skies threatened rain late in the morning but thankfully the weather held off and play continued unabated. 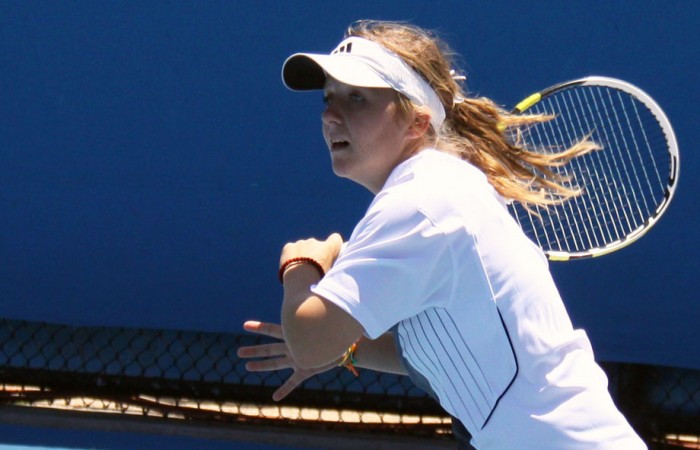 It’s Friday at Melbourne Park and that means semifinal action at the 2011 Optus 14s Australian Teams Championships.  Overcast skies threatened rain late in the morning but thankfully the weather held off and play continued unabated.

In the girls’ competition, the first semifinal pitted favourites and top seeds Queensland against the plucky fifth seeds from South Australia. Chloe Hule pushed Sara Tomic all the way, but, after dropping her first set of the week, Tomic eventually put it all together, prevailing 6-2 in the third.

Lizette Cabrera then finished the job for the Queenslanders with a comfortable straight-sets win over Olivia Ley, giving Queensland an unassailable lead two rubbers to love, thus wrapping up the tie and moving them into tomorrow’s final.

The other semifinal saw second-seeded NSW take on Western Australia, the No.3 seeds. In one of the more entertaining girls’ matches of the week, young West Australian Anja Dokic held her nerve after a second-set comeback from previously undefeated Pamela Boyanov to win 6-4 in the third.

Ivana Vojinovic then clinched overall victory for the lower seeded West Australians with a closely fought 6-4 7-5 win over Maddie Antoun.

We now look forward to a tantalising final between Queensland and Western Australia tomorrow.

The top-seeded NSW boys’ team has been untroubled all week and today they were involved in the first semifinal against the third seeds from Western Australia. The first singles match saw Jake Delaney up against West Aussie Jack Lyttle. Both boys came into the match with unblemished singles records this week and the match proved a tight three-set tussle with the higher ranked Delaney eventually pushing past Lyttle 6-1 in the third.

It was then left to Will Berrigan to wrap things up for NSW, which he did, sailing past Scott Jones in straight sets to put NSW into the final, two rubbers to love.

Local lads and fourth seeds Victoria went into the semifinal against fifth seeds New Zealand slight favourites on paper, but the form of the Kiwis this week has been very impressive. In the end, it was the New Zealanders comfortably with Kyle Butters taking out Daniel Nolan in straight sets and his compatriot William Matheson dropping just the one game against Marcel Du Sart. As such, the doubles was a dead rubber and New Zealand moves through to take on New South Wales in what has the makings of a very exciting final tomorrow.

In the girls’ competition, New Zealand accounted for Northern Territory 3-0 and Victoria took the honours 3-0 over Tasmania.

The boys’ and girls’ finals will be played at Melbourne Park tomorrow with play beginning at 9 am on Courts 20 and 18 respectively. Entry to Melbourne Park, home of the Australian Open, is free.