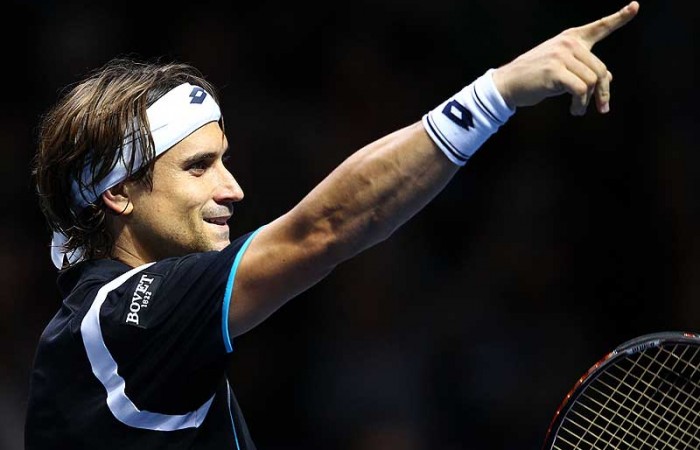 Spain’s David Ferrer dented Andy Murray’s hopes of winning the ATP World Tour Finals on home turf in London with a 6-4 7-5 victory over the world No.3 on Monday.

Ferrer, ranked fifth in the world, had lost his last four meetings with Murray but he overwhelmed the Scot with some impressive baseline play to set the pace in Group A.

Murray had won all five of his previous encounters with Ferrer on hard courts, including a victory in the recent Shanghai final that capped the Scot’s triumphant Asian tour.

Since losing to Rafael Nadal in the US Open semi-finals, Murray has won 17 of his 18 matches, a remarkable run that brought him titles in Thailand, Japan and China and lifted him above Roger Federer to third place in the world rankings.

But he appeared hindered by a leg injury from midway through the first set at the O2 Arena and was never at ease as Ferrer’s fierce competitive instincts kept him off balance.

Murray didn’t help his cause with 44 unforced errors and he will need to improve significantly if he is to qualify for the semi-final from a group that also includes world number one Novak Djokovic and former Wimbledon finalist Tomas Berdych.

“I’m sorry for the people and for Andy as he is a good friend but I’m happy to win the first game here in London,” Ferrer said.

“I played consistently all game and served well in the important moments. Andy has problems but I played my game.”

Murray, watched by friend and former heavyweight champion David Haye, landed an early blow as he broke in the third game when Ferrer sent a forehand into the net.

But Ferrer, a finalist in this event back in 2006, hasn’t become a mainstay in the top 10 without a ferocious competitive streak of his own and, aided by three Murray errors, he broke straight back in the next game.

Another break point slipped through Murray’s grasp at 4-4 and he was made to pay as Ferrer took the set.

The Scot saved one set point at 4-5 but couldn’t repel the second as a miscued forehand — one of a host of uncharacteristic mistakes from Murray — drifted wide.

Murray called for a medical time-out to get treatment on his left leg during the break between sets.

If his body was feeling the strain, Murray got the perfect balm with a break in the opening game of the second set after Ferrer carelessly netted on break-point.

Once again, the tenacious Ferrer responded impressively and secured a break of his own to level at 2-2.

Murray’s movement still seemed slightly restricted by his injury, but he found enough rhythm to break Ferrer for a 4-3 lead.

That advantage swiftly disappeared as Ferrer, playing with real aggression from the baseline, broke back in the next game.

Murray just didn’t have any answer to Ferrer’s metronomic consistency and the Spaniard closed out the match with the decisive break at 5-6.