The Brisbane International men’s singles trophy was today named in honour of one of Queensland’s, and Australia’s, greatest ever tennis players, Roy Emerson. 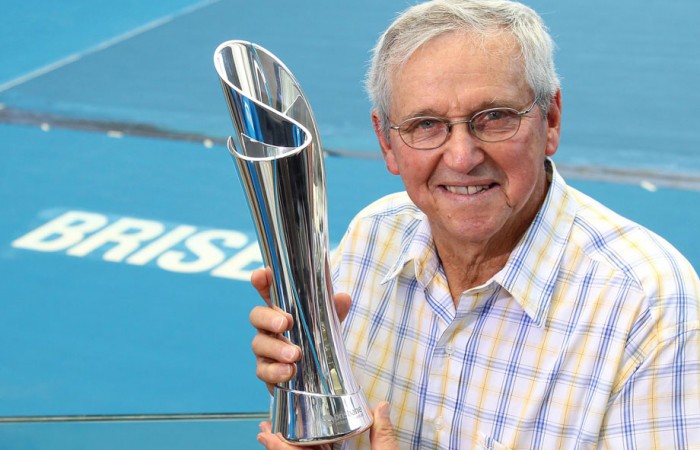 The Brisbane International men’s singles trophy was today named in honour of one of Queensland’s, and Australia’s, greatest ever tennis players, Roy Emerson.

Cooper, one of the driving forces behind the Queensland Tennis Centre, and Rafter were delighted to show Emerson and his fellow tennis legends the newly commissioned silverware to be known as the Roy Emerson Trophy.

“It’s wonderful to have Roy here today for the naming of the Roy Emerson Trophy,” Cooper said.

“Queensland has such a rich tennis history and it’s only appropriate that we recognise Roy’s contribution to the sport in our state in this way.”

“It’s a tremendous honour to have the Brisbane International trophy named after me”, Roy Emerson said today.

“Never in my wildest dreams did I think I would be recognised in this way.”

“The Brisbane International is a fantastic event. The state of Queensland has made a big contribution to Australian tennis so it’s only fitting that Brisbane has a chance to host such a major tournament, particularly one of the few combined events in the world where both the men and women have the chance to play.”

Emerson was born in Blackbutt, Queensland in 1936 and still holds the record for the most Grand Slam titles won by a male player – 12 singles titles and 16 doubles titles. He is also the only male player to have won singles and doubles titles at all four Grand Slam tournaments, and has won the Australian Open six times, more than any other player.

The first Brisbane International was staged in 2009 and since then has seen world-class talent including Novak Djokovic, Andy Roddick, Robin Soderling, Kim Clijsters, Ana Ivanovic and Justine Henin in competition.