Roger Federer defeated Tomas Berdych 6-4 6-3 on Saturday to reach the final of the Paris Masters for the first time in his career. 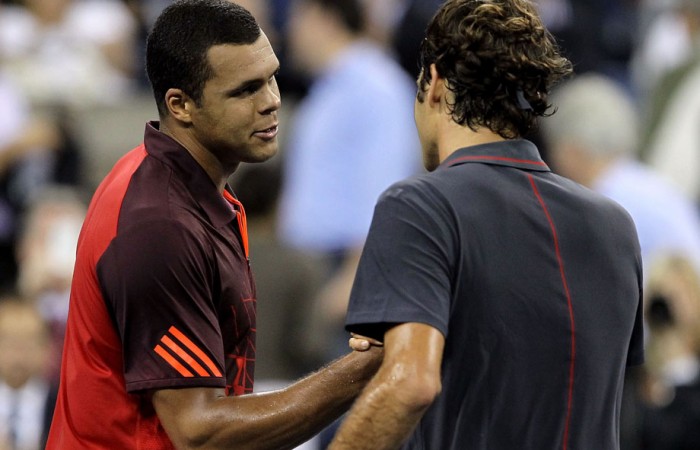 Roger Federer defeated Tomas Berdych 6-4 6-3 on Saturday to reach the final of the Paris Masters for the first time in his career.

The 30-year-old Swiss holder of 16 Grand Slam titles will play the 2008 champion Jo-Wilfried Tsonga of France who defeated giant American John Isner 3-6 7-6(1) 7-6(3) in the other semifinal.

A break of serve in the first game of each set was all the former world No.1 needed to see off the challenge of Berdych who beat second seed Andy Murray in a marathon quarter-final on Friday.

“I really liked the way I played,” said Federer, who won the 800th match of his career on Friday when he defeated Juan Monaco in the quarterfinals.

“After winning my 800th match, reaching the final here for the first time and becoming the first player to reach the finals of the nine Masters is great.

“But the match was tough. Tomas was maybe a bit slow in the early games and I was able to take advantage of that. He fought back well and it was only at the end that I was able to pull away.”

Federer made a storming start against a player who had given him problems in the past. He immediately had the big Czech on the defensive and clinched a first break of serve when a rasping cross-court forehand forced an error.

The third seed powered through his own serve and had a break point to go 3-0 up in the next game before Berdych finally started to find his range.

Federer though was comfortable on his own serve and took the first set 6-4 despite a double fault at 40-15 ahead in the 10th game.

Berdych stumbled again at the start of the second set, handing Federer two break points by netting an easy-looking overhead smash and he then netted a routine forehand from the baseline.

Federer, who won just his second tournament of the year last week in his hometown of Basel, smoothly moved 2-0 up and he never looked like being caught from there on in.

Berdych saved a break point after double-faulting in the seventh game, but two games later Federer went 40-0 up and clinched the win when a demoralised Berdych netted a weak forehand.

A win on Sunday would be just the second time that Federer has lifted a title in the French capital with his only triumph at Roland Garros in the French Open coming in 2009 when he beat Sweden’s Robin Soderling in the final.

It would also set him up perfectly for the season-ending ATP Tour finals in London which start the week after next.

Tsonga, who has also qualified for the London ATP finals, had noisy support from a packed Bercy Stadium, but he was the first to be put under pressure sending down a big first serve to erase a break point in the third game.

Two games later two double faults gifted Isner further break points but the Frenchman again saved both only to hit narrowly wide with a drop volley at the net on the next break point to the American.

Isner was dominating on his own huge serve and he comfortably took the first set 6-3.

The American failed to convert two break points in the third game of the second set and then saved two against himself in the next game.

Serves dominated from there on forcing a tiebreak, which Tsonga pocketed comfortably 7-1 on the back of a rash of unforced errors from Isner to level the set scores.

Tsonga failed to convert three break points at 40-0 ahead in the decider which would have given him a 5-4 lead, and then had to serve twice to stay in the match saving three match points at 5-6 down to set up another tie-break.

The Frenchman quickly jumped out into a 3-0 lead and Isner was unable to find a way back from that.