Novak Djokovic needed a fightback while Roger Federer eased into the Swiss Indoors semi-finals in Basel on Friday. 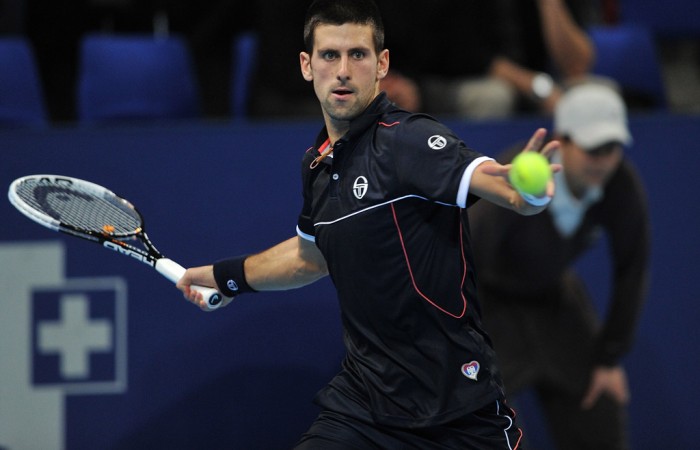 Novak Djokovic needed a fightback while Roger Federer eased into the Swiss Indoors semi-finals in Basel on Friday.

Top seed Djokovic fought back to dispatch Marcos Baghdatis 2-6 6-2 6-3 to confirm a welcome return to form.

The Serb set up a clash with rising Japanese star Kei Nishikori, a 6-4 5-7 6-4 winner in nearly three hours over Kazak Mikhail Kukushkin.

Federer, the No.3, was efficiently ruthless in front of his fanatical hometown crowd as he inflicted a 21st defeat on Andy Roddick from 23 meetings with the American.

Federer’s 64-minute match was the fourth time the pair have played at the Swiss player’s home event, with Federer winning all with the cumulative loss of just one set.

“It was a tough day for Andy, he wasn’t at his best,” said Federer, who is bidding to win a second title this season after claiming Doha at the start of the year.

“This is the only match where he didn’t serve well against me.”

Federer finished off Roddick with back-to-back aces, his third and fourth as he competes for the first time since mid-September after resting some minor injuries.

“It didn’t seem like he was so much into his game. My game got better as I went along, especially on serve. I’m pleased to be into another semi-final and facing Stan is always tough.”

Federer has lost only once against Wawrinka, his gold medal Beijing Olympic doubles partner whom he has beaten three times this season.

Djokovic, competing for the first time in six week after back trouble, fought off a dozen aces from Baghdatis to move into the last four at the event he won in 2009 over Federer.

He dropped serve twice in the opening set but quickly put his game right to steam through in just over 90 minutes.

“It was a tense match, Marcos played well.
“He started well, I had no life on the court. But I made the crucial break at 3-2 and that was the key to the match, that decided it.

“I had my chance to comeback in the match and I did. I know my game will get better. I’m just impatient for that to happen.”

Djokovic’s win was his 67th of a sensational season against just three losses.

The 32nd-ranked Nishikori will be competing in his third semi-final in six weeks after making it to the final four last month in Kuala Lumpur and at the Shanghai Masters, which was the best showing of his career.

“It’s a great feeling,” he said after the victory. “I knew this would be tough, but another semi-final is a great result for me.

“I was up a break in the second set and didn’t really think I’d be playing a third but I struggled a bit. I played the last three games of the match very strong.”

The Florida-based Nishikori took 20 minutes short of three hours to win his sixth quarter-final from seven played this season.

“He’s had a great last few months and is a very talented player,” said opponent Djokovic. “It should be a good match.”