The first stop on the Australian Open domestic trophy tour was Adelaide last week with visits to Launceston and Devonport coming up this week. 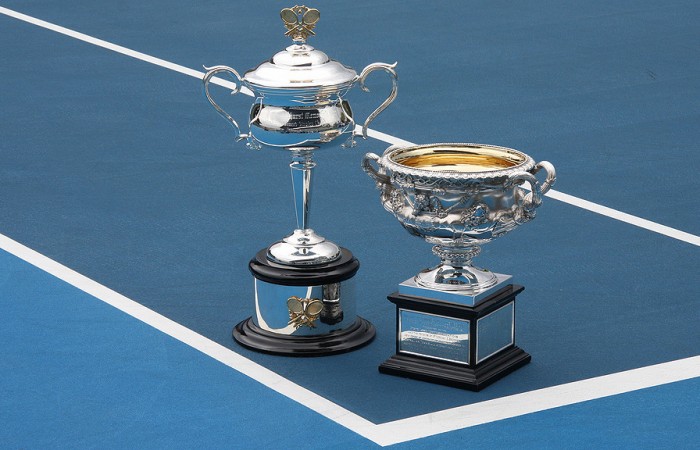 The city of Wuhan in China was the first offshore destination, followed by Shanghai and Beijing.

After visiting some of China’s most historic sites and meeting the likes of Chinese tennis player, Sun Tiantian (2008 Australian Open mixed doubles title winner), and Chinese Australian pop singer Li Xiaoyan. Norman and Daphne returned to Australia at the end of October to start their domestic tour.

Adelaide was the first domestic stop, which coincided with the South Australian launch of the National Tennis League.

“It is a great initiative of Tennis Australia to take the Australian Open trophies around the country to the grassroots and give tennis fans the opportunity to see the trophies, touch them, and hopefully inspire kids to one day win them,” Rasheed said.

“When I was coaching Lleyton Hewitt in 2005 we were two sets away from winning the Norman Brookes Challenge Cup but unfortunately we didn’t, and that hurt,” Rasheed added.

Whilst in Adelaide, the Australian Open trophies enjoyed a series of radio appearances on the ABC and Triple M breakfast programs, as well as popular 5AA sports drive show. They were also invited on the set of the 6:30 pm Channel Seven news bulletin.

2012 is very historic year for the Australian Open as it will be the 100th time the men’s singles title is contested.  To mark this significant milestone, school children from the Barossa Valley created colourful pictures of Norman and Daphne, to decorate their local recreational hall for the trophies’ visit.

Councillor, Mr David Lykke, was also excited to welcome the trophies to his region and lined up with the school children and other locals to feel like a Grand Slam champion by having his photo taken with Norman and Daphne.

Whilst in the Barossa, Norman and Daphne also paid a visit to Jacob’s Creek Chief Winemaker, Bernard Hickin, and were treated to a VIP tour of the vineyard. Jacob’s Creek staff and visitors also had the chance to be snapped with the impressive trophies.

“I have always been a great tennis fan and I love going to the Australian Open – I will be there next January,” Hickin added.

To round off their South Australian trip, Norman and Daphne attended the Tennis SA Awards night.

This week they head to Tasmania, Launceston (2-3 November) and Devonport (4 November), and meeting some Tasmanian devils is a priority on their ‘to do’ list.

Other upcoming Australian Open Trophy Tour stops include Sunshine Coast and Gold Coast in Queensland, Alice Springs, Perth, Canberra, Bowral and Sydney in NSW and the Victorian Surf Coast, before finishing their journey at Melbourne Park on Monday 16 January for day one of Australian Open 2012.

Fans can follow the trophies around the country online by visiting australianopen.com.au/trophy