Stosur’s year over after Kvitova loss

Samantha Stosur's run at the season-ending WTA Championships has come to a halt at the hands of big-hitting Petra Kvitova in Istanbul. 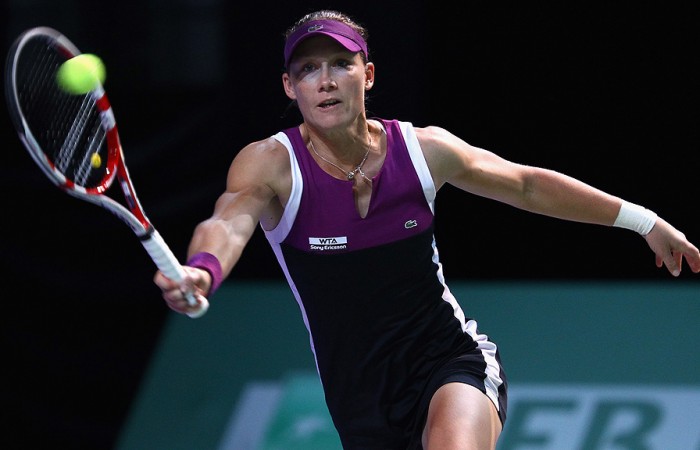 Sam Stosur’s run at the season-ending WTA Championships has come to a halt at the hands of big-hitting Petra Kvitova in Istanbul on Saturday.

The reigning Wimbledon champion rallied from a set down to defeat Stosur 5-7 6-3 6-3 in just over two hours in a gripping semifinal encounter at the Sinan Erdem Arena.

World No.3 Kvitova, undefeated indoors this year in 18 matches, will play Victoria Azarenka in Sunday’s title decider in a rematch of their semifinal at the All England Club this year.

Azarenka easily accounted for Vera Zvonareva 6-2 6-3 in the other semifinal.

Stosur did well to withstand an early barrage from Kvitova to win the opening set but the US Open champion was eventually worn down by the lanky left-hander’s power hitting.

The Australian picks up AUD$345,000 for her work this week before a well-deserved three-week break ahead of the Australian summer.

Stosur ends the year as world No.6 for the second straight campaign.

However the Queenslander is a much more content figure these days following her Flushing Meadows success.

She was not too disheartened by her defeat to Kvitova, having at least claimed a set off her in their third meeting.

“This was definitely my best match against her so far,” Stosur.

“At least I was able to come off the court knowing that I did everything I could.

“I got beaten by a player who played very well today. I’m happy with the way I played.”

While many of her rivals limped to the finishing line at the end-of-season tournament, Stosur was hungry for the new season to start.

“It was the same thing last year, I got to the Championships and felt like I started playing really well again, almost didn’t want to stop,” she said.

“Now I could probably say the same thing now, but obviously it’s been a long year and you always look forward to that break.

“But certainly it’s now makes you eager to do that training and get into the next year.”

Stosur entered the contest having lost her two previous matches against Kvitova in straight sets.

Standing a full four inches taller than the Australian, the left-hander dominated the opening exchanges in the indoor arena but Stosur hung in there.

At 3-4 and 0-40 down, the Australian pounced and then broke Kvitova for a second time in the 12th game to claim the set.

Kvitova rebounded to crack Stosur’s serve in the third game of the second set and the Australian found it difficult to contain her thumping ground strokes.

After collecting the second set, Kvitova looked like cruising through the final set.

At 5-0 down and in danger of not getting on the board in the final set, Stosur gritted her teeth and pulled back three games before Kvitova sealed the win.