Sam Stosur has romped into the semifinals of the season-ending WTA Championships in Turkey by humbling China's Li Na 6-1 6-0 on Friday. 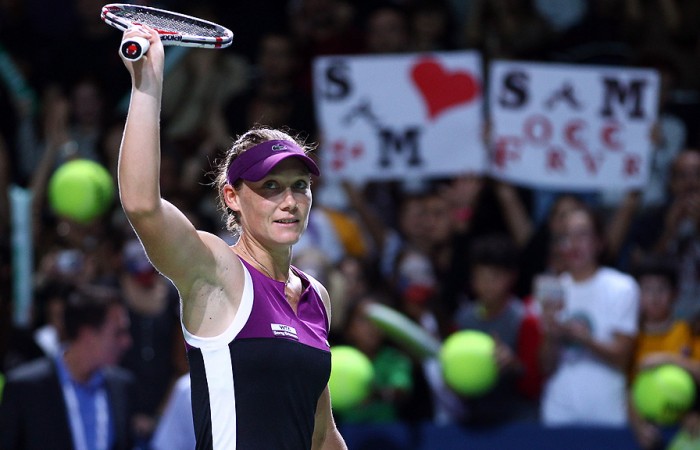 Reigning US Open champion Samantha Stosur has developed a habit of picking on the world’s best players.

The Australian continued to bully her higher-ranked opponents by mauling French Open champion Li Na 6-1 6-0 in their final round robin match at the WTA Championships.

She has produced a tour-leading seven wins from nine matches against the top five this year.

Stosur rebounded from an awful midweek performance against Victoria Azarenka in Istanbul to steamroll her way past world No.5 Li and into the semifinals of the USD$4.9m tournament.

Such was the Australian’s grip on the contest the Chinese player was unable to hold serve for the entire match.

World No.7 Stosur thought the reason for her success against the cream of world’s tennis was because she had no choice but to be at her very best.

“It’s always good to have a record like that,” she said.

“For some reason the last couple of years I have been able to have good records against top 10 players, top five players.

“I think I go into those matches thinking I can play well and really have no choice but to try and do that.

“And if you do, then I feel my tennis can match up well against anyone.

“I guess I have managed to do that at the right time.”

The win improved Stosur’s record against Na to 6-0, with four of those wins coming this year.

Li made a terrific start to 2011 by reaching the Australian Open final before becoming the China’s first grand slam champion at Roland Garros.

However her form has petered out in the second half of the year and Stosur’s power game overwhelmed her at the Sinan Erdem Arena.

“After Sam win the US Open, I think for sure she has a lot of confidence,” Li said.

“Before she always had tough serve for all the girls and after she won the US Open, I mean [she’s] even tougher.”

“That loss against Victoria could have really hurt her but this showed that she is really at the top of her game at the moment,” he said.

Stosur was determined to make up for her wayward performance against Azarenka.

“I was thankful it wasn’t my last match and had another chance to come out and try and redeem myself and play better,” she said.

“If I lost tonight I wanted to lose on my terms and play well at least.

“Obviously I didn’t really get close to that.”

Stosur will play the in-form Petra Kvitova in Saturday’s semifinals, the big Czech left-hander having won both their two encounters at the 2008 French Open and this year’s Australian Open.

The Queenslander lost in the semifinals of last year’s season-ending tournament to eventual champion Kim Clijsters.

Victoria Azarenka takes on Vera Zvonareva for the other spot in the final with action starting from 3:00 pm on Saturday (2300 AEDT).