Samantha Stosur must defeat Li Na on Friday night to reach the semifinals of the season-ending WTA Championships. 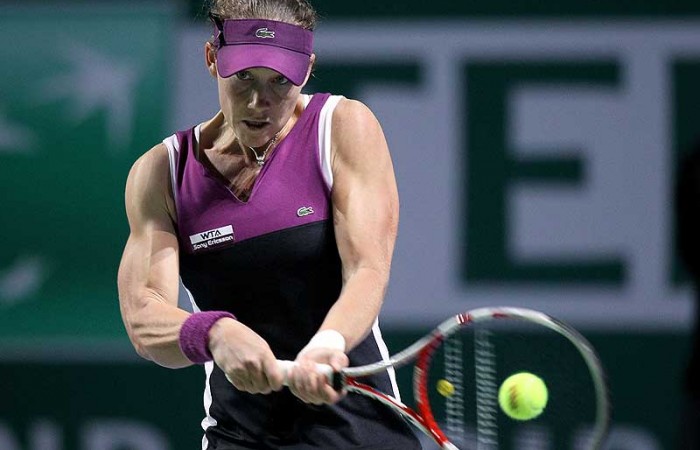 Samantha Stosur must defeat Li Na on Friday night (Saturday AM AEDT) to reach the semifinals of the season-ending WTA Championships in Turkey.

World No.4 Victoria Azarenka was the first to qualify from the white group at the $US4.9 million ($A4.75 million) tournament with a 6-2 6-2 win on Thursday over the Chinese player.

The winner of the Stosur-Li match at Istanbul’s Sinan Erdem Arena will be the second and final player from the group to make the last four.

Stosur is seeking to reach the semi-finals of the elite eight-woman tournament for the second straight year.

The reigning US Open champion opened her tournament in impressive fashion by defeating Maria Sharapova for the first time in ten meetings, 7-5 6-1.

However she was a shadow of herself the following night when she succumbed to Azarenka, 6-2 6-2.

Stosur enjoys a 5-0 win-loss record against French Open champion Li, including three wins this year with two of those on hardcourt.

The Queenslander has troubled this year’s Australian Open finalist in the past with her kick serve and heavy ground strokes.

World No.1 Caroline Wozniacki was knocked out of the tournament following her 6-4 6-2 loss to Petra Kvitova. In the last match on Thursday night, Agnieszka Radwanska overcame Vera Zvonareva 1-6 6-2 7-5.