Victoria still a secret for Stosur

A wayward Samantha Stosur suffered a straights-sets drubbing at the hands of world No.4 Victoria Azarenka at the season-ending WTA Championships in Turkey. 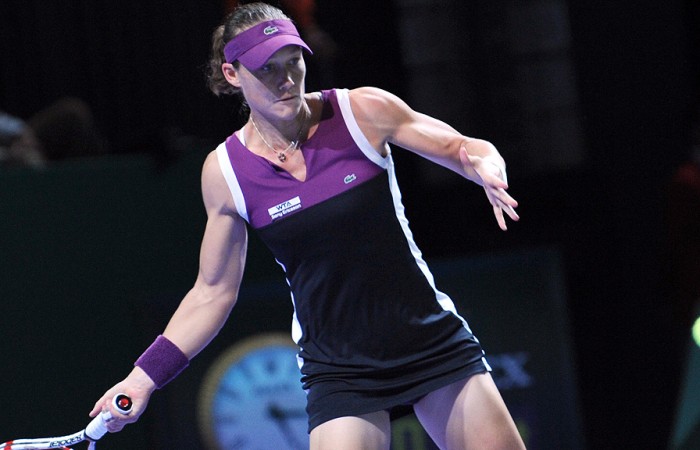 A wayward Samantha Stosur suffered a straights-sets drubbing at the hands of world No.4 Victoria Azarenka at the season-ending WTA Championships in Turkey.

Following her breakthrough victory over Maria Sharapova on Tuesday night, the Australian was out of sorts in her 6-2 6-2 round-robin loss to the clinical Belarussian at Istanbul’s Sinan Erdem Arena.

It was the Queenslander’s fifth straight defeat against Azarenka and the world No.4 has yet to drop a set against Stosur.

The result means the reigning US Open champion must defeat Li Na in her final round-robin match on Friday (Saturday AM AEDT) to reach Saturday’s semifinals.

The top two players from each group advance to weekend action in the elite eight-woman competition.

“I didn’t play aggressive enough. I don’t feel like I did anything,” Stosur said.

“I just kind of got pushed around the court and, eventually, was made to make an error or she’d hit a winner.”

Stosur produced 26 unforced errors to her opponent’s 13 but dismissed her tight schedule being the reason behind her ordinary showing.

“Yeah, it was a quick turnaround but I felt like I was ready to go.”

“I was so happy to win this match. I was fighting a lot on the court,” Li said.

Sharapova pulled out of the tournament following her defeat, citing a recurrence of her left ankle injury sustained in Tokyo last month.

Her withdrawal confirmed Caroline Wozniacki as the end-of-year world No.1 for the second straight year.

Having snapped a nine-match losing streak against Sharapova on Tuesday night, Stosur was a shadow of herself against another scream queen on Wednesday.

After playing in the last match on the first night, Stosur was handed a tough schedule by drawing a fresh Azarenka for the opening match of day two.

While Stosur entered the match with confidence, the Belarussian was coming off last Sunday’s WTA title win in Luxembourg.

The Australian made a sloppy start by dropping her serve twice in the opening set with a series of unforced errors.

Stosur screamed out in frustration during the sixth game but continued to fire wide with an overcooked forehand, handing the first set to Azarenka in 34 minutes.

The Australian continued to make life hard for herself in the second set, losing her bearings as she sent a simple smash wide and Azarenka marched to a 5-2 lead.

Stosur saved three match points before dragging a backhand into the net to end the match in an hour and 18 minutes.