Samantha Stosur ended a career-long nine-match losing streak against Maria Sharapova with a 6-1 7-5 victory at Istanbul. 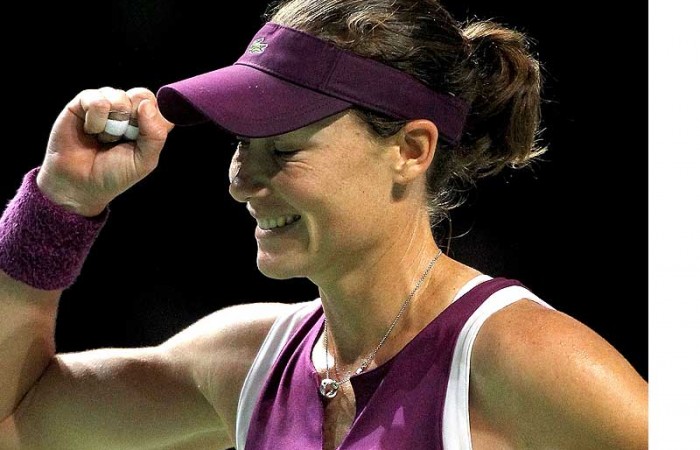 Samantha Stosur ended a career-long nine-match losing streak against Maria Sharapova with a 6-1 7-5 victory in their opening round robin match at the season-ending WTA Championships in Istanbul.

US Open champion Stosur’s win over the Russian puts her on track to reach Saturday’s semi-finals of the elite eight-woman competition.

Since their first encounter in 2004, the Australian has spent seven years trying to solve the problem of Maria before finally breaking through on the opening night of the $A4.8m championships.

Not that the job gets much easier for Stosur, she takes on a fresh Victoria Azarenka on Wednesday night.

Stosur has lost all four of her previous meetings with Azarenka but should fancy her chances based on Tuesday’s showing at the Sinan Erdem Arena.

The Queenslander received a warm reception on entering the court but it was nothing compared to the love shown for the Russian whose fiance Sasha Vujacic plays basketball in Turkey.

The Australian imposed her will on the contest early and romped through the first set in less than half an hour.

In her first match since injuring her ankle a month ago, Sharapova started to find her game in the second set and broke Stosur’s serve.

After Sharapova raced to a 3-0 lead in the second set, Stosur clawed her way back and cracked the Russian’s serve for a 6-5 lead.

The Australian showed plenty of nerve serving for the match as she saved three break points before securing the win with an errant shot from Sharapova.

Stosur has regularly had problems against taller players such as Sharapova and Venus Williams with the heavy top-spin from her ground strokes making the ball lift up invitingly into their hitting zones.

However she showed tactical nous to move Sharapova around and frustrate her by mixing up her shots with plenty of slice.

Li Na is the other player in Stosur’s half of the draw with the top two players from each group progressing to Saturday’s semi-finals.

Stosur said an improved mindset had helped her pull off what she considered one of the best wins of her career.

“It was definitely up there with my best victories,” she said.

“It is hard to rate them but it is definitely one of my most pleasing and being at the Championships and making a good start is a good thing as well.”

Sharapova said that Stosur’s speed around the court and defensive skills had been critical to her win, not attributes the Queenslander has been renowned for in the past.

“She was much more explosive than I was and she used her slice really well and it stayed quite low on the court,” Sharapova said.

“It is our first meeting indoors if I am not mistaken. She played really solid and really well and moved extremely well around the court and made me hit another ball.”

Stosur has drawn the short straw in the scheduling, being made to start proceedings on day two after playing the last match of day one.

However she did not feel she was overly disadvantaged against Azarenka, who will be playing her first match of the tournament on Wednesday at 5pm (0100 AEDT Thursday).

“I’m happy to be in my situation rather than hers,” Stosur said.

“I mean, she was the last one to come here this week after playing the tournament (in Luxembourg) the week before.

“And I’ve had plenty of court time out there and I’m still feeling fresh. I’m fine with playing straight up again.”

Stosur believed the win against Sharapova put her in a good position to open her account against Azarenka.

“Hopefully tonight is going to be a good omen that things are turning around in my favour against players that I’ve struggled with,” she said.

“I think it’s going be a tough one, new day, and in some ways it’s actually a very similar kind of matchup (to Sharapova).

” … Knowing I was able to achieve a good result tonight definitely gives me confidence for tomorrow.”