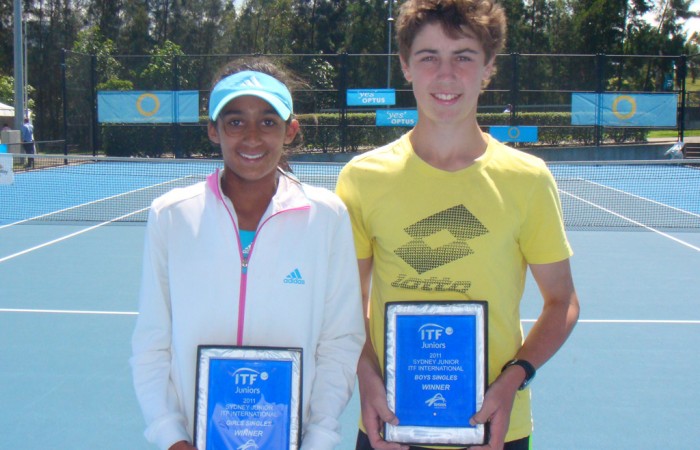 “I got off to a slow start and was 2-0 down and was missing a lot, but I picked up my game to take out the first set”, said Bains, who is currently ranked 937 on the Junior ITF World Rankings, but with this win will jump to inside the top 650 next week.

The second set started off better for Bains who carried the momentum from the end of the opening set to race to a 5-1 lead.

“It got a little windy and Danielle started to play a little better to get the next few games, but I just had to stay tough and concentrate on every point and it was good to close it out eventually.”

In the boys singles final, Jordan Thompson carried his good form to outclass Victorian sixth seed, Jacob Grills 6-1 6-1 in just over an hour.

“I got off to a great start in both sets and defended well and took it to him and unfortunately for Jacob he made a few errors”, said Thompson, who is currently ranked 161 on the Junior ITF World Rankings but will break into the top 140 next week.

“I have just had four months off with an elbow injury so it’s good to be back on the court and good to have a win.”

While Bains will look to make it a hat-trick of wins next week at the Gosford Junior International, Thompson will rest up and recover in preparation for a swing of Asian tournaments later in the month.  Both players will then play more tournaments in the USA later in the year before the Australian junior summer circuit next year.