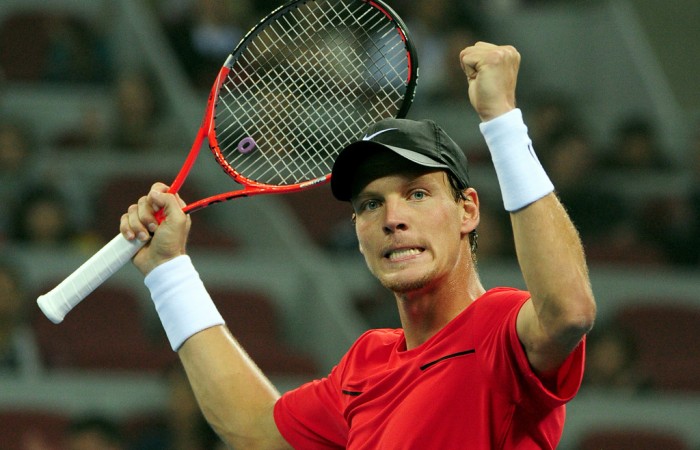 He will face Marin Cilic, who deployed his powerful serve to ease past fellow Croatian Ivan Ljubicic 6-4 6-3 in the other semi-final in Beijing.

Tsonga was unable to take control of the on-form Berdych, who is one of his rivals in the chase for a spot at next month’s World Tour Finals season wrapup in London.

The world number 10 took advantage of 15 Tsonga unforced errors, pounding his way into the final with his eighth ace on match point.

“This final could turn my season from a good one to a really great one,” said Berdych.

“I thought I was in with a good chance, I’m expecting a tough final tomorrow.”

Cilic outserved his opponent with 13 aces against nine from Ljubicic.

He broke serve to lead 5-4 before serving out for the first set.

“I then started serving better, the start of the second set was really crucial,” said the 23-year-old.

“It was maybe the best I’ve ever served.”

Ljubicic was up 3-1 in the second set but failed to make the most of his opportunities, dropping serve in the fifth game when his forehand clipped the net and fell wide.

Cilic pounced on the opportunity and dominated the remainder of the match, eventually breaking his opponent to love in the final game for a 6-3 finish.

Radwanska takes a 4-0 winning record against Petkovic into the women’s final.

The Pole is looking for an Asian double after winning in Tokyo a week ago.

She dominated Pennetta a day after the Italian upset world number one Caroline Wozniacki.

The Romanian, who knocked out Li Na and Maria Kirilenko earlier in the tournament, is projected to rise to a career-high ranking of 35 next week.

Petkovic will be playing her third final of the year after winning in Strasbourg and finishing as runner-up in Brisbane.

The German, beaten twice before by Niculescu, said she went into the contest with a fresh attitude.

“I never underestimated her, I went in as if I was playing the number one,” she said.