Wozniacki drops out of China Open

Caroline Wozniacki was knocked out of the China Open quarter-finals on Friday after losing to Flavia Pennetta of Italy 3-6 6-0 7-6 (7-2). 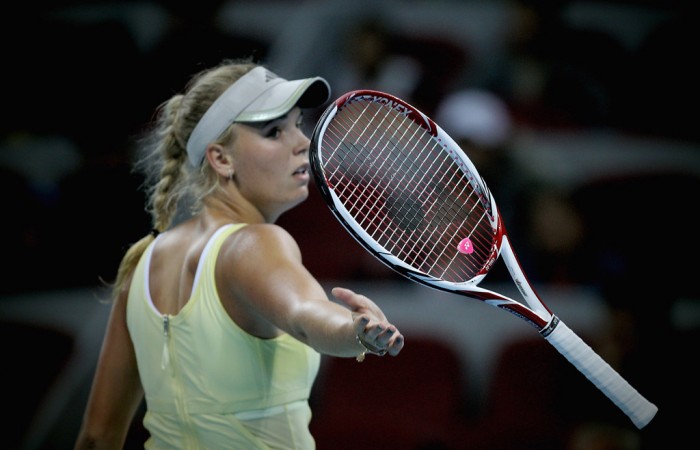 Top-ranked Caroline Wozniacki was knocked out of the China Open quarter-finals on Friday after losing to Flavia Pennetta of Italy 3-6 6-0 7-6 (7-2).

Wozniacki was two points from victory when leading 30-0 in the final game of the third set, but Pennetta won the game and then the tiebreaker.

“I did my best today but it just wasn’t good enough,” the Dane said.

“I had my chances and didn’t take them.”

Pennetta will next face 11th-seeded Agnieszka Radwanska of Poland, who advanced after Ana Ivanovic of Serbia retired with back pain while trailing 6-3 3-2.

Ivanovic said she’d been struggling with the pain since last month’s tournament in Tokyo.

“It hasn’t really been getting much better,” said Ivanovic, adding that doctors were examining the results of her latest MRI.

“It’s too early to say anything.”

Top-seeded Jo-Wilfried Tsonga secured a spot in the semi-finals of the men’s tournament by beating Juan Carlos Ferrero of Spain 6-3 6-4.

“It was just amazing,” the Frenchman said.

Tsonga will next face third-seeded Tomas Berdych of the Czech Republic, who beat Fernando Verdasco of Spain 6-1 6-0.

Both Tsonga and Berdych are chasing spots at the season-ending ATP World Tour Finals in London.

“Tomorrow will be exciting for sure. We both want to win tomorrow to be safe for the Masters,” Tsonga said.

“We both will play our best tennis.”

Berdych broke Verdasco six times and was broken only once to improve his hard-court record against the Spaniard to 6-1.

“I felt really good on the court and played really well,” Berdych said.

“Hard court is much more suitable for my game style. I can play more aggressive, I can give him much more pressure, less pace on the court, and then he starts to do more mistakes, more unforced errors.”