Bernard Tomic and Marinko Matosevic both suffered straight-sets losses to crash out of the ATP Malaysian Open, leaving Australia without a representative in the event. 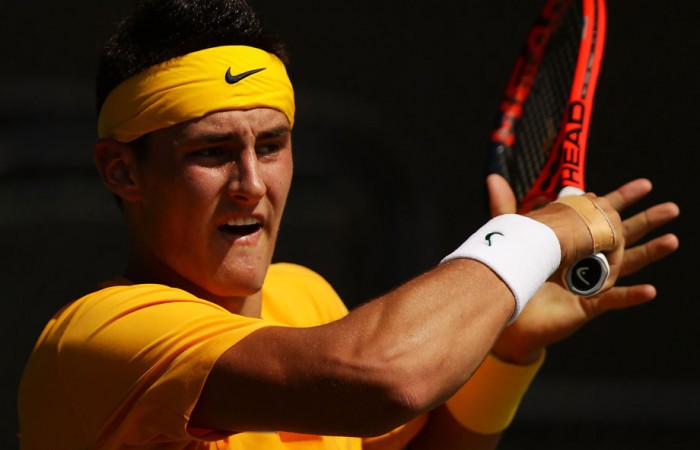 Bernard Tomic and Marinko Matosevic both suffered straight-sets losses to crash out of the ATP Malaysian Open, leaving Australia without a representative in the event.

Three Australians have been eliminated at the first hurdle on the indoor court at the Putra stadium.

On Monday’s opening day, Australian No.137 Matthew Edben was knocked out by Belgian David Goffin.

The defeat was a harsh blow to 18-year-old Tomic, tipped as the future of the Australian game as Lleyton Hewitt struggles to regain top form as chronic injuries begin to inhibit his game.

Since stirring passions with his Wimbledon quarterfinal nearly three months ago, Tomic’s form has also dropped, with the Australian posting just four wins from 10 matches.

He beat Stanislas Wawrinka to keep Australia alive in the Davis Cup tie in Sydney this month, but lost in reverse singles to Roger Federer as Switzerland eventually won the weekend in Sydney for a return to the World Group for 2012.

Tomic, ranked 59th, met Cipolla, nearly a decade older, for the first time, with the loss pushing the Australian’s account for the season into the negative with 12 defeats against 11 wins.

Melzer, champion at the US Open doubles this month with German Philipp Petzschner, could not have asked for a better start to the autumn Asian calendar.

“I’m very happy with my performance today, it’s been a while since I’ve hit ball like this,” said the 30-year-old who required just 63 minutes to complete the rout for his 20th win of the season.

“The first set was one of the best I’ve played all year for sure. I’m feeling really good here, hopefully it can continue,” said Melzer.

“Conditions are very slow but if you have enough power it can give you a little more time to set up for your shots and go for some winners which is nice for my game.”