US Open Champion Samantha Stosur crashed out of the Pan Pacific title in Tokyo on Tuesday, her first match since claiming her maiden Grand Slam title. 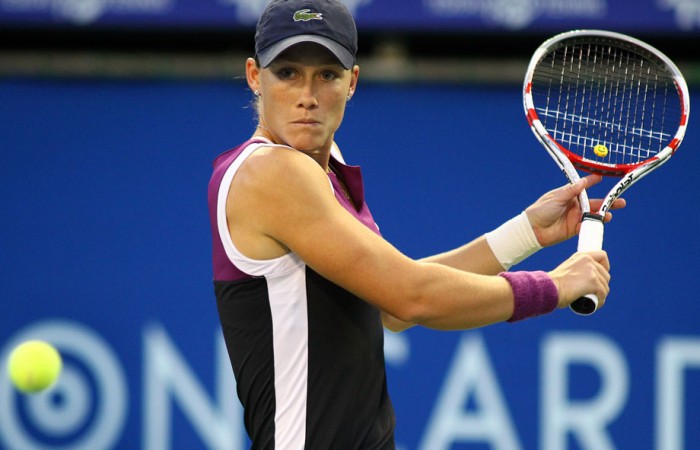 US Open Champion Samantha Stosur crashed out of the Pan Pacific title in Tokyo on Tuesday, her first match since claiming her maiden Grand Slam title.

World No.1 Caroline Wozniacki launched her defence of her Pan Pacific title with a win over Australian Jarmila Gajdosova in three sets.

The 27-year-old Stosur, playing her first match since her US Open final win over Serena Williams two weeks ago, fell victim to Maria Kirilenko of Russia 6-2 4-6 6-4 in the second round.

“I had a very tough match in the US Open [against Stosur]. Especially in the second set, I had to play the longest tiebreak. I knew she is going to be a little bit different,” said Kirilenko.

“Every time you win a Grand Slam, it’s tough to play next tournament and I had a feeling that I have a chance today. I just took this chance.”

Kirilenko, ranked 28th against Stosur’s seventh, moved up a service break in the second set, but failed to keep the lead hitting a double fault on a break point to tie at 4-4 before losing the set.

The Russian again lost a service break in the final set to be tied at 4-4, but broke back in the following game to lead 5-4 and made no mistake as the Australian’s backhand shot landed in the net on her second match point.

“I think I was playing really good today, especially in the first set. I was moving fast today from the beginning of the match to the end. I’m just happy with the way I played,” said Kirilenko.

Stosur admitted she struggled for consistency.

“I think the difference was she stayed mentally very strong from the first point to the last point, while I was kind of up and down,” she said.

Wimbledon champion Petra Kvitova of the Czech Republic safely qualified for the next round beating Mandy Minella of Luxembourg 6-2 6-3 to stay on course for a potential quarterfinal match against Maria Sharapova.

Before a possible match-up with Sharapova, Kvitova must beat American Vania King, the winner over Anastasia Pavlyuchenkova of Russia 6-4 7-6(6).

Earlier, third seed Victoria Azarenka of Belarus eased aside Irina-Camelia Begu of Romania 6-1 6-3 to reach the third round, while fourth seed Vera Zvonareva of Russia outplayed Tsvetana Pironkova of Bulgaria 7-5 6-0.