Update 7:10 pm. Australia's hopes of returning to the Davis Cup World Group hang on a precipice with Switzerland just one game from snatching the tie after fading light brought a halt to a fifth set decider between Lleyton Hewitt and Stanislas Wawrinka. 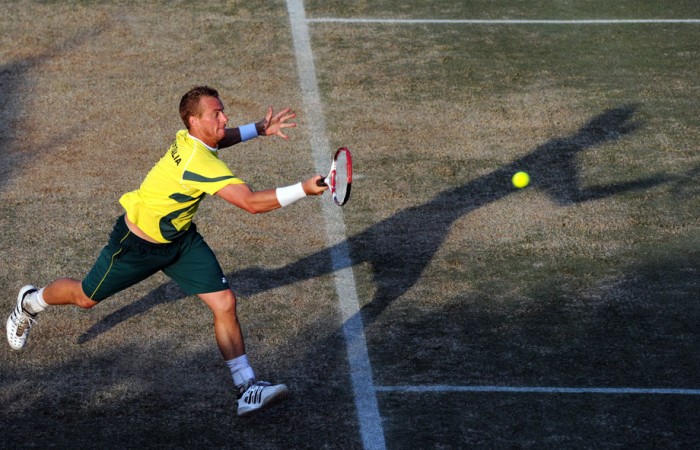 Australia’s hopes of returning to the Davis Cup World Group hang on a precipice with Switzerland just one game from snatching the tie after fading light brought a halt to a fifth set decider between Lleyton Hewitt and Stanislas Wawrinka.

Play will resume at 11 am (AEST) on Monday, the winner of the set ensuring their country returns to the 16-team elite group in 2012.

Officials had no option but to suspend the match despite the inopportune timing, Hewitt now having to win his first serve upon resumption just to stay in the encounter.

A four-set win by Roger Federer over Bernard Tomic in the first reverse singles gave little indication of the drama to come with all but the most optimistic of pundits expecting the tie to come down to the final match between Hewitt and Wawrinka.

The Swiss No.2 had battled injury, his least favoured grass surface and indifferent form in losing his opening singles match to Tomic and then the doubles on Saturday to go into the match an outsider – despite a world ranking of No.19 compared to Hewitt’s No.199.

But Wawrinka turned the formguide on its head to push Hewitt to the brink.

The Australian had not played in a live fifth rubber during his 13-year Davis Cup career but looked up to the task after breaking Wawrinka in the first game and holding on to claim the set.

It took just one break point to decide the second set the Swiss’s way as Wawrinka threw caution to the wind and pulled off some spectacular winners from both wings to set up a set point.

The third set was more dramatic, with Wawrinka earning four set points in a pivotal tiebreak.

But Hewitt would not be denied, a lunging cross-court volley getting the tiebreaker back on serve, Wawrinka then netting a forehand on set point.

Wawrinka bludgeoned his way through the fourth set and captured a vital break in the fifth game of the decider to take control of the match.

It was another promising display from the 2011 Wimbledon quarterfinalist, who snatched the third set and also had his chances in the second after being up a break of serve.

Play will resume on Monday at 11 am to complete the final rubber. The match will be televised live on 7TWO from 11 am. All patrons with tickets to today’s session (Sunday 18 September) will be able to enter the venue on Monday. Gates will open at 10:00 am.