With the Davis Cup World Group Play-off all squared away after day one, the attention turns to what could be the play-off decider - the doubles. 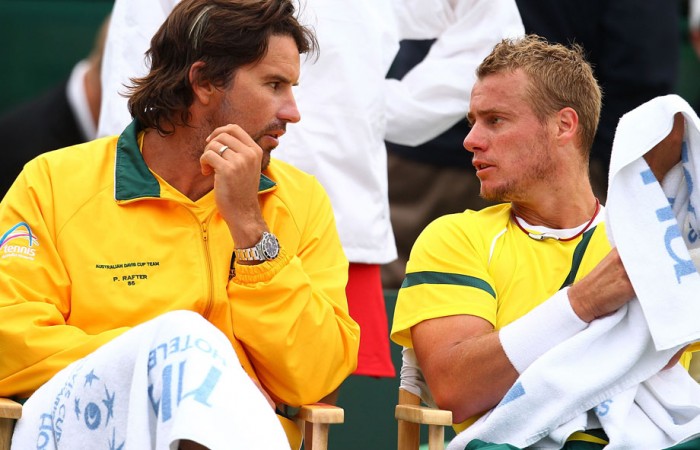 With the Davis Cup World Group Play-off all squared away after day one, the attention turns to what could be the play-off decider – the doubles.

If the teams play as named at Thursday’s draw, then Australia’s Chris Guccione and Lleyton Hewitt will face off against Swiss superstar Roger Federer and Stanislas Wawrinka. The teams have until one hour before the tie to make a change.

Much has been said of Wawrinka and Federer’s doubles gold at the 2008 Olympics this week, but that was three years ago. It was also Federer’s last title win in the team form of the game.

In more recent times, Federer and Wawrinka joined forces at Indian Wells in March and made it to the final, including a win over Rafael Nadal and Marc Lopez. Between 2009 and 2010, Federer appeared in doubles draws just four times for a meagre two wins. And none of these matches were played with his partner today, Stan Wawrinka.

And as for the Swiss pair’s Davis Cup record together? They have only teamed twice, for two wins, but never on grass.

Hewitt has played Davis Cup doubles rubbers twice on grass – for two losses. He and Guccione have teamed up just once for their country – earlier this year in China for a straight-sets win.

The Gooch has a 3-0 Davis Cup doubles record and will be looking to extend that today to 4-0.

The Australians will have the luxury of having the crowd behind them in Sydney, they’ve also spent more time on the grass courts at the Royal Sydney Golf Club.

Federer, however, is one of the great grasscourt players. Wawrinka isn’t.

No matter which way you look at this rubber, there are cases for and against both teams.

The key may well be Guccione. The big-serving lefty has the wing-span of a small aircraft and may well prove difficult to handle. His boom serve and reach at the net will be crucial to the Australians.

For the Swiss, there’s little that Federer can’t do. Questions do surround Wawrinka though. After falling in four sets to world No.59 Tomic in the first rubber, he maintained that he is fit and will be fine to play today.

Eighteen-year-old Tomic did well to keep Wawrinka guessing by changing the pace of his ground strokes, which the Swiss No.2 failed to adapt to. And Hewitt and Guccione will no doubt target Wawrinka today as per Rafter’s instructions before the tie began.

So, who will win? Forget the stats – they don’t matter today. Neither team has a clear advantage when it comes to playing experience – these duos haven’t sweated it out for years like the Woodies or the Bryan Brothers. Yes, Wawrinka and Federer won an Olympic doubles title together, but that’s history.

This rubber may well decide who plays in the World Group in 2012 and, like this tie, sits on a knife’s edge.

As for my tip? Don’t miss this match. If you haven’t got a ticket you can watch it live on 7TWO from 12:30 pm (check local guides for full details).