Australia is in touching distance of a return to the elite Davis Cup competition for the first time since 2007 after a four-set win in the vital doubles match against Switzerland at Royal Sydney on Saturday. 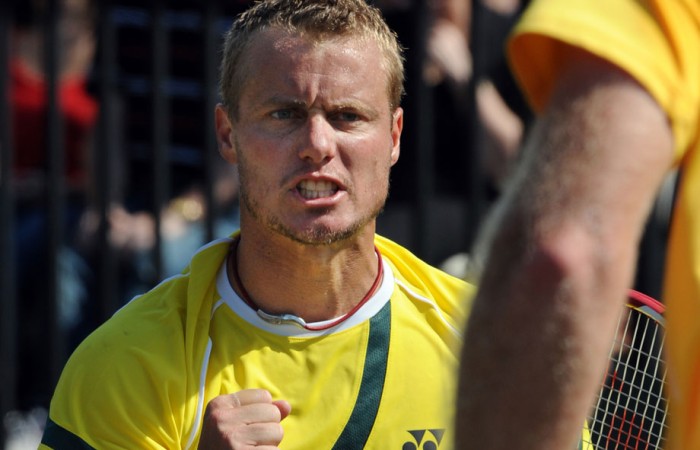 Australia is in touching distance of a return to the elite Davis Cup competition for the first time since 2007 after a four-set win in the vital doubles match against Switzerland at Royal Sydney on Saturday.

Lleyton Hewitt and Chris Guccione claimed a 2-6 6-4 6-2 7-6(5) victory over Roger Federer and Stanislas Wawrinka to push the home side to a 2-1 lead in the play-off tie.

It was the dream result for Australia, who had all but written off claiming a singles rubber from world No.3 Roger Federer, instead focusing much of their efforts on winning matches involving Wawrinka.

Bernard Tomic has the onerous task of trying to beat Federer in the first of the reverse singles on Sunday but it’s the fifth rubber which is expected to determine the tie; Hewitt already indicating he’d fancy his chances in a live decider against the Swiss No.2 who has struggled playing on grass.

Like he did in his losing singles rubber against Tomic on Friday, Wawrinka started well as the Swiss claimed the first set but things began to unravel in the second.

The Swiss challenged the ball being called in but with the umpire unsighted the point stood and Australia had a break point which they duly converted.

Hewitt then found another level, firing off winners almost at will in a golden period during the third set.

And the former world No.1 dragged the laidback Guccione with him, fist-pumping, chest bumping and yelling in the lanky Victorian’s face.

Guccione’s brief medical time out to get treatment on an Achilles problem at 4-1 failed to halt the momentum as the home team took out the set 6-2.

The fourth set went without a break of serve through to the tiebreak in which the Swiss stole an early advantage with a series of brilliant returns from Federer setting up a 4-2 lead.

But a terrific return of serve from Guccione, quality serving by Hewitt and an error from the out-of-sorts Wawrinka handed Australia the tiebreak and match.

After the match, Hewitt first paid tribute to Federer then his partner in victory, Guccione.

“He was too good for me yesterday but doubles is a different competition,” said Hewitt.

“Gooch gutsed it out there in the end and I just tried to play my hardest … There’s something special about team competition … For me I leave all my passion out here.”